One Love Manchester will probably go down in history as one of the most well-received fundraiser concerts of all time. And it was all down to Ariana Grande.

At 23-years-old, in less than two weeks, after immense trauma, Ariana organised the Live Aid of her generation, bringing teen faves Justin Bieber, Katy Perry, Miley Cyrus and Little Mix together with crowd-pleasing dad-bands Take That, Coldplay, Mumford & Sons, and even one-half of Manc mainstay Oasis.

The concert raised over £2.35 million for the British Red Cross’s Manchester Emergency Fund, set up in the aftermath of the terrorist attack which claimed the lives of 22 people following Ariana’s concert in Manchester two weeks ago. When she’d have been forgiven for withdrawing from public, instead Ariana visited the families of the victims, spent time with survivors in hospital, and set about putting on the biggest last-minute show anyone had ever seen.

And it went beyond the usual “peace and love” platitudes you might expect. At the request of the mother of one of the victims, Ariana changed the setlist of the concert to include more of her chart hits. Which meant that amid the heartfelt anthems, One Love Manchester featured a playful rendition of ‘Side To Side’, arguably Ariana’s most provocative song to date. And that’s what made the event (and its tiny, high-ponytailed organiser) so special. A defiant refusal to be afraid. A determination to embrace life, and above all have fun.

Twitter was flooded with people saying things like “I’d never heard of Ariana until today, but good for her for doing this.” Even that infamous opinion-haver Piers Morgan retracted his previous statements about the singer, calling her an “admirable young woman.” As if a pop singer needs to pull off a feat like this to be worthy of admiration. As if the snobbery of a middle-aged white guy matters a single jot when a 23-year-old woman is conducting herself with more dignity and grace than a good many of our politicians. She managed to get Liam Gallagher to stand on the same stage as Chris Martin, for heaven’s sake.

Of course, a number of the people who were so flabbergasted by Ariana’s bravery were also the sort who downplay the cultural power of pop music, and consistently underestimate the strength and resolve of girls. 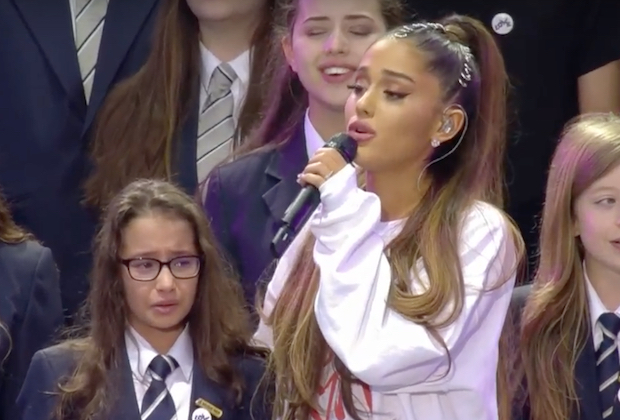 Dealing with trauma and responding to acts of terror aren’t the kind of things that are covered in a pop star’s media training. And as a singer whose fan base consisted mostly, let’s be real, of young girls and gays, Ariana wasn’t always taken seriously as an artist. But the way she has embraced her fans in the wake of tragedy, channelled pain into something healing, and sent out a message of hope and unity, proves without a doubt that she is a star.

In the past, Ariana has faced criticism for her coquettish look and naughty lyrics, with some deeming her too “sexual” to be a role model for young girls. Here’s hoping that once and for all, she has demonstrated that there is so much more to a girl than how she looks. Because right now, Ariana Grande is the best role model any girl, or boy for that matter, could ask for.

You can donate to the British Red Cross’s Manchester Emergency Fund by clicking here!