These statements probably conjure up a few ideas in your head about what exactly a night like that would have entailed. Surely I must have hot-footed it from the local Gala Bingo and spent my winnings on entry to an all-night tech rave? Surely those activities are mutually exclusive? Well…no. Enter Bongo’s Bingo.

It’s a madcap rave version of Nanna’s favourite game that’s sweeping the nation. Set up by two mates from Liverpool, the event has been touring the country’s biggest cities with great success. 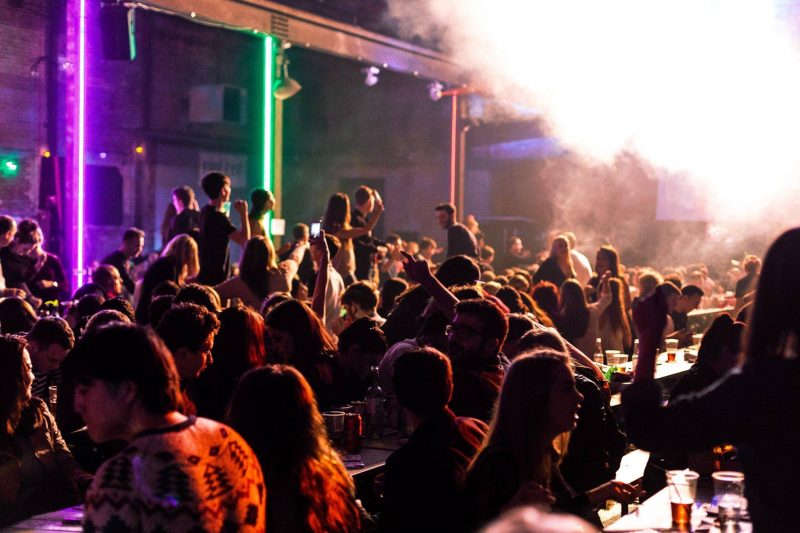 Despite a clearly different vibe to the traditional carpeted arenas of the game’s heyday, the entrance to the graffiti-daubed warehouse in central Birmingham seemed pretty innocuous. We lined up, were given our game books and pens and found a seat amongst the Oktoberfest-style bench arrangement. There was even a broad mix of ages. So far, so normal.

That was until, after getting through a couple of Red Stripes, people around us started to stand up on their benches one by one to sing and sway to the strains of Beyoncé’s ‘Halo’ and then remained there for about another five songs. The game hadn’t even started yet.

When it did, on came the compère flanked by a couple of other blokes in full drag to act as his helpers. They explained to the (already raucous) crowd the rules of bingo and that not only was dancing on benches allowed, but that is was actively encouraged as part of the game. I must admit, the sensible person deep within me was thinking of the obvious health and safety minefield. But this was not a night for the sensible.

In the middle of a game when seemingly random numbers were called, the hosts had the chance to get everyone up on to their seats dancing to a cheesy pop tune or classic dance track. Think Reach For The Stars by S Club 7 or Freed From Desire by Gala. We were then expected to sit back down and continue with the next number as if nothing had happened. Quite the test of one’s fitness, balance and concentration.

The prizes were also as random as the music choices. From what I can remember they included a life-sized cardboard cut-out of Phillip Schofield, a Henry vacuum cleaner, bottles of Lambrini and Apple Sourz, inflatable sumo suits and sizable cash rewards for those lucky enough to land a house.

When all the games were done everyone simply continued to dance the night away to tune after classic tune, Schofe’s now-disembodied head bobbing amongst the sweaty, flailing arms. God knows where the poor Henry was.

At the end of the night, none of us had actually won anything but we came out thinking we’d had an awful lot of fun for the meagre £8 entrance fee we paid. I can now proudly say that I’m a bingo convert. Although if Nanna asks to accompany me to Bongo’s, I might have to decline – not with her hip.

Wearable catwalk trends and where to buy them

Alternative nights out in Birmingham that won’t break the bank

Here’s where to get the best Sunday roast in Birmingham