At nearly 21-years-old, Baz Luhrmann’s adaptation of Romeo and Juliet still remains as iconic as it did when it first hit the big screen in 1996.

Last night, we headed to Birmingham Botanical Gardens for the first night of Cult Screens, an outdoor cinema that’s touring the country showing some of the biggest movies of the year alongside classics like Top Gun and of course, Romeo and Juliet.

Botanical Gardens is one of the gems of our city. Situated on the outskirts of the city centre, it works as a perfect location for an outdoor cinema. Cult Screens did an amazing job in transforming the grassed area into a cosy setting to kick back and watch a film that still makes me laugh and cry every time. The stunning surroundings of beautiful trees provided enough shelter to block out any traffic noise from the nearby roads, meaning that we were able to watch the film without little disturbance. 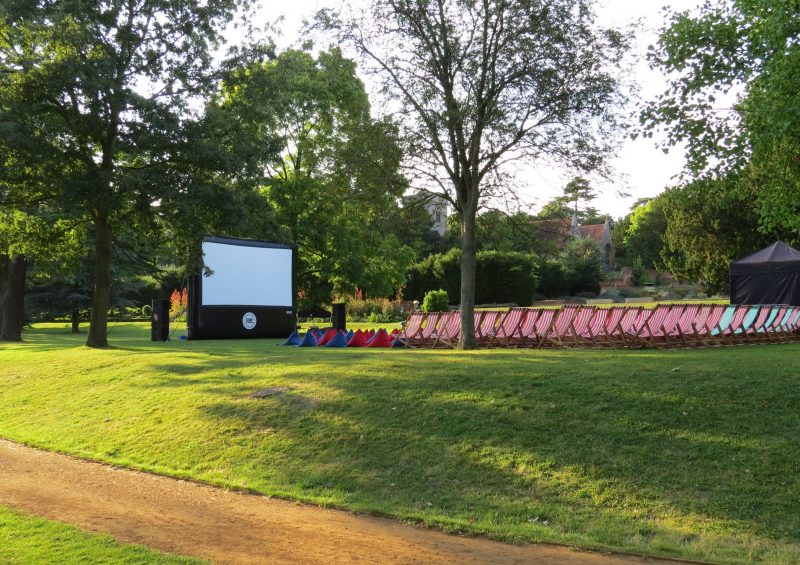 It’s not just the surroundings that help to create a relaxed atmosphere. If you’re happy to pay a bit more money, you can kick back and relax on a comfy bean bag or deck chair while sipping on a glass of prosecco, wine, or hot drink and a bag of popcorn that comes with your ticket price. For extra comfort, you can loan out a blanket for that extra cosiness, although it’s worth noting that you’re welcome to bring your own.

Food is on offer too, but we advise if you’re going along this weekend that you get there early as the queue built up rather quickly, and we nearly missed the start of our film while waiting to be served. That being said once we’d found our bean bags and settled in, we only had a short time to wait before the film began as it doesn’t start until the sun has fully set. In terms of the quality of the movie, the sound is impressive and clear, but the only slight disappointment is that the movie doesn’t actually fill the entire screen, which could prove to be a little frustrating if you’re sat quite far back.

There’s something magical about watching a film under the stars on a crisp September evening and Romeo and Juliet is a film that at 21 seems to be refusing to age. The humour and heartbreak is timeless and Luhrmann’s direction is still as slick and stylish as I remembered when I studied both the play and movie in high school. Don’t even get me started on a baby-faced Leo, who was only 21 when the movie was originally released.

Cult Screens runs for two more nights (tonight and tomorrow) where it’s showing Top Gun and the multi award-winning La La Land. So if you’re looking for a date night with a difference, grab yourself some tickets for Cult Screens at Botanical Gardens this weekend. Just remember to wrap up warm!To find out more, click here to find out more.

Take a look at this exciting 10-day music event at Selfridges!