Taj Express is an energetic on-stage explosion of the very best that contemporary Bollywood has to offer.

Bollywood is the world’s largest film industry, producing almost 2,000 films each year and selling over a billion tickets more annually than Hollywood does. The popularity of Bollywood is largely founded in its spectacle; the majority of films produced by the Indian-based industry feature dramatic plots, lavish sets, colourful costumes and elaborate production numbers. In fact, over 90% of Bollywood films include song and dance as a device to move the plot along. This musical element being such an integral part of Bollywood-style productions makes Taj Express an obvious fit for the stage, and this will certainly be proved during its week-long run at the Birmingham Hippodrome. 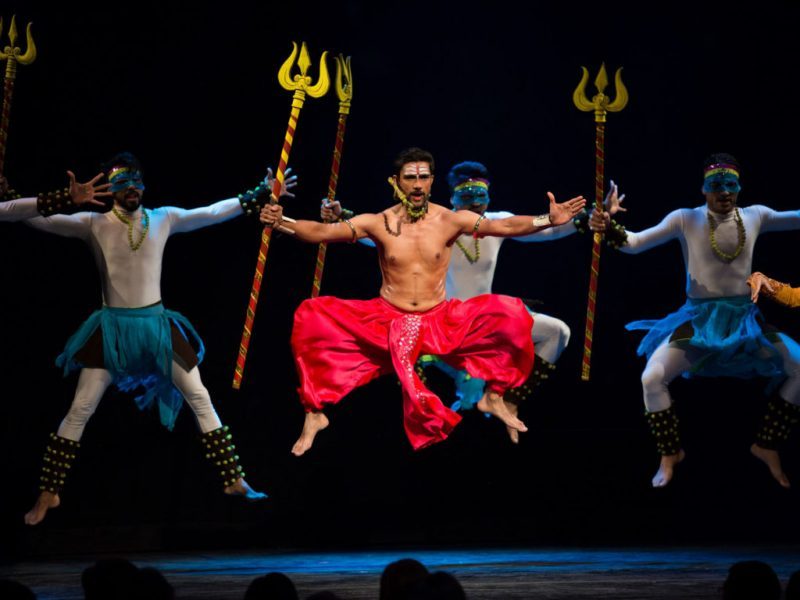 Packed full of songs by A. R Rahman (the Oscar winning composer of Slumdog Millionaire), Taj Express follows the story of young composer Shankar who dreams of working in the movies and becoming the next “Mozart of Madras”. After a brief traditional opening, the show bursts to life with the hit song Jai Ho, instantly bridging the gap between cultures – if you haven’t heard of A. R Rahman, you will definitely have heard of The Pussycat Dolls.

Shankar speaks directly to the audience, acknowledging the importance this song had in bringing Bollywood to Hollywood, and instantly breaks down the forth wall between actor and audience: tonight “participation is mandatory”. Shankar explains his dream to be just like his musical idol, A. R Rahman, and how he believes he can reach the Oscar-winning heights of Jai Ho with his latest film score.

As Shankar’s story progresses, the stage becomes increasingly populated by colour and movement. He leads us through the script he’s working on, and page by page it springs to life in a meta-theatrical rendering of Shankar’s story – a film called Taj Express. Within this story lives Kareena Kaboom, a reigning Bollywood superstar, and Arjun, the “king of the streets”. What follows is a story of forbidden romance and the pressures of fame, a narrative full of tropes we’ve seen a thousand times before, and yet Taj Express’ consistently strong musical numbers make up for what could otherwise be a rather weak narrative.

Short scenes of dialogue are interspersed with dazzling dance breaks, which outweigh the storyline by far. The choreography, however, speaks for itself, and the simple plot allows for Vaibhavi Merchant’s intricate choreography to shine, with no help needed from the dazzling costumes – though Bipin Tanna’s rainbow of designs only add to the brilliant spectacle on offer for the audience.

The thin narrative is wholly acknowledged by the characters as Shankar reads each page of the script to his band, who roll their eyes and sigh at cliches such as ‘the lovers meet in a rainstorm’ and ‘the dream sequence’.

“Are you serious?!” exclaims Shankar’s guitarist Flash (“the Indian Slash“), a role played hilariously by Chandan Raina, who balances expert guitar solos and comedic to-the-audience asides with ease. Flash is the perfect foil to Vidyuth Gargi’s performance as Shankhar, who does an excellent job of expressing his character’s innate passion for music; a passion that sometimes blinds him to the realities of his work, but Flash is always on hand to bring him back to earth. 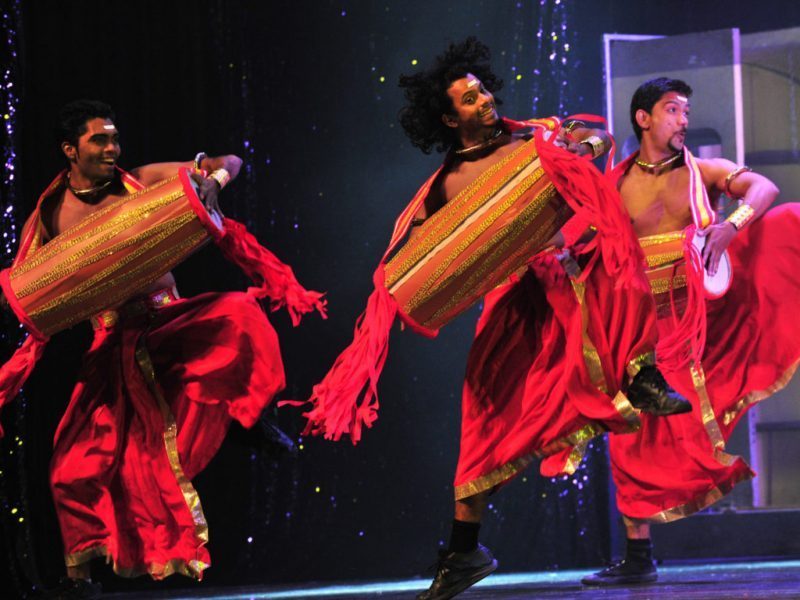 The tongue-in-cheek attitude of the entire piece allows Taj Express to indulge in the most lavish of Bollywood spectacles, while also calling out its known cliches and exploring what makes this film industry so popular. In embracing the ridiculousness of its many worn-out tropes, Taj Express is allowed to push them further, admitting that, though it may have been done before, why would that mean that Shankhar can’t do it better? This results in a number of wholly enjoyable scenes, such as the gang fight sequence in which Arjun takes on his foe in a battle that is almost reminiscent of West Side Story.

With dialogue in English and songs in Hindi, Taj Express fuses cultures and offers a contemporary take on what people may perceive Bollywood to be. References to celebrity figures such as Gareth Southgate, Megan Markle and recent sports news – “I’m going to create music more vicious than Serena Williams smashing her tennis racket!” – prompt laughter from the audience, and unites both East and West through universal pop culture.

The stage stands almost completely bare, apart from Shankar’s small studio at the back, practically inviting the cast to fill it with music, movement, colour and life. The absence of a set does not for one moment take away from the show’s vibrancy, which fills the stage throughout the two-hour run time, and leaves the audience with an infectious energy as it becomes increasingly tempting to join in with the lively dance breaks. The ensemble’s joy for their art is palpable, and only works to emphasise the feeling of celebration that Taj Express exudes.

The presence of a live band on stage further enhances the community feel and celebration of music. Rather than hiding their musicians away backstage or in an orchestra pit, they are invited onstage to become part of the community because they are the community, and therefore essential to Shankar’s story. Music is at the heart of everything throughout this show, so the stage presence of the band seems almost obvious, as does their inclusion as characters in the central story. 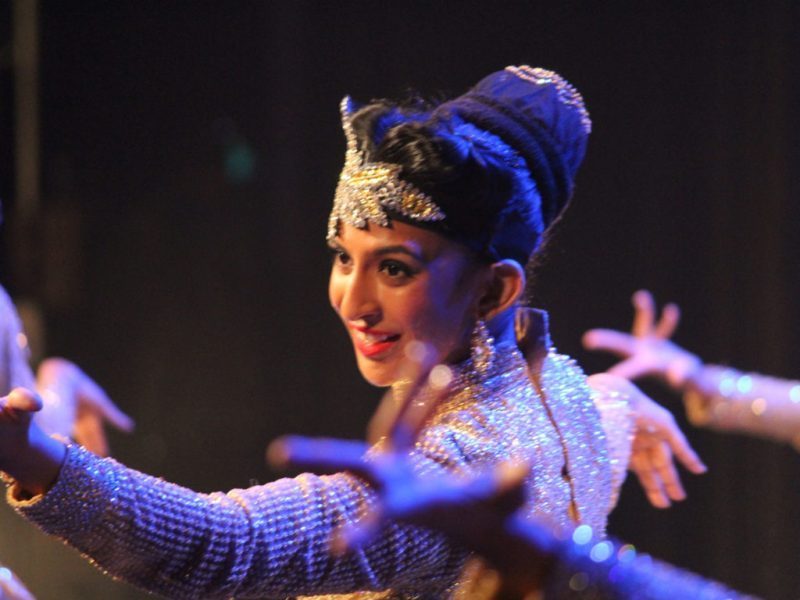 Taj Express is directed by Shruti Merchant, who – along with her choreographer sister Vaibhavi – is descended from Bollywood royalty. Their grandfather B. Hiralal and his brothers B. Sohnlal, B. B Chinnilal and B. Radheshyam worked in Bollywood during its Golden Era, and contributed to some of its most iconic dance numbers, so it’s no surprise that Taj Express oozes the very essence of what makes Bollywood so spectacular. Merchant’s direction is consistently lively and maintains an energy throughout that engages the audience despite possible language barriers during the Hindi-sung portions of the show.

In a city as wonderfully multicultural as Birmingham, the celebration of Bollywood culture feels right at home. It’s an indulgent escape into cinema on stage; as promised from the very beginning, its a Bollywood film come to life, and the meta-theatrical telling of Shankar’s story offers a spin on what we know this unique cinema industry to be.

Taj Express runs at the Birmingham Hippodrome until September 15 2018.
Get your tickets here.

What's on in Birmingham this weekend?