A few years ago you may never have heard of Joe Wicks. But after posting his first video on Instagram, the personal trainer went from running boot camps to transforming thousands of lives with his 90 Day SSS plan and Lean in 15 books.

We meet Joe at The Glee Club, he’s touring cities across the country promoting his latest book from his Lean in 15 instalments. “It’s not as big this time,” he tells us, “My first book came out last December and I was travelling to 14 different cities, every night I would be somewhere new.

“I think that’s how it is when you first start, but I feel more established now and can communicate with my followers on social media, so I don’t need to visit so many cities. I’m visiting five this time, they are at bigger venues and I’m also doing a vote where followers can vote to bring me to their city.  At the minute Manchester is in the lead but Leeds is also doing really well. I just think it’s a great way fans can interact with me.”

Growing up in Surbiton, Joe had dreams of becoming a school P.E teacher, which led him to completing a degree in sports science. But after a stint as a teaching assistant, he tells us he soon realised it wasn’t really for him.

“I gave it up and decided to go into my true passion which was fitness; this led to me becoming a personal trainer at a gym, after doing a six-week qualification. I took quite a solo route and developed my own website where I started doing boot camps and personal training for over three years.”

Best known as The Body Coach, Joe sky-rocketed to fitness stardom through social media, using platforms including Twitter, Snapchat and Facebook to post his quirky Lean in 15 recipe videos. “I started using Twitter to begin with and then Instagram opened up its video option in 2014,” he says. 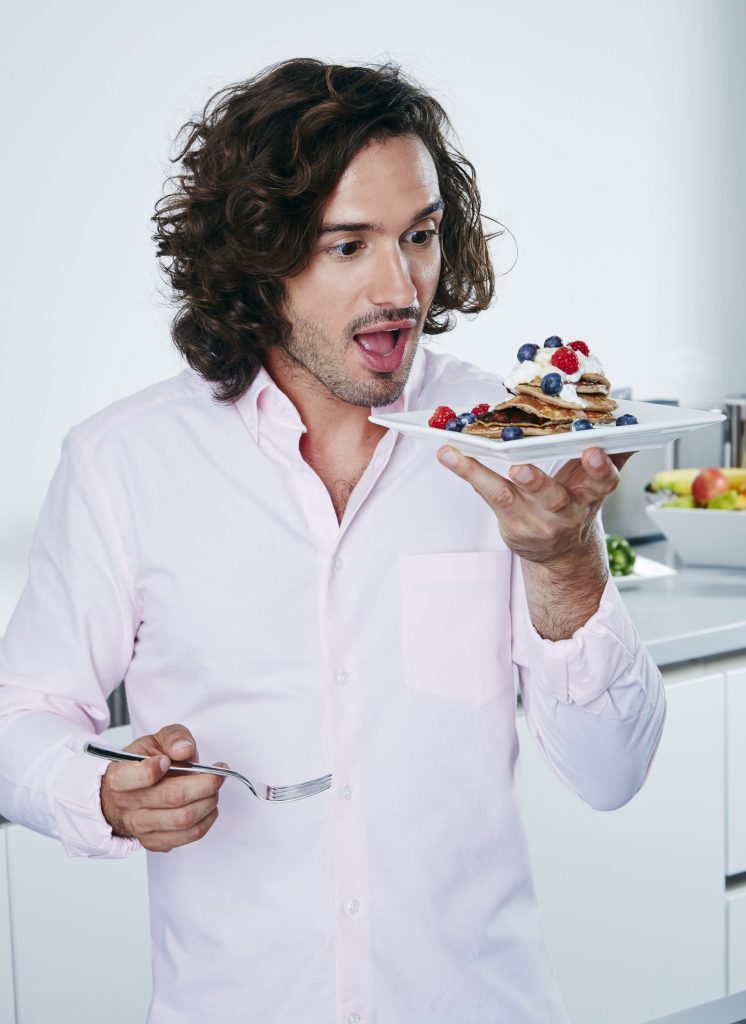 “I wasn’t the first to do them, loads of people were putting out video recipes, but I had the idea of Lean in 15 and the way that I could deliver it was different, and that just started to build up an attraction. It was an accidental thing really, I never planned on it.”

It’s no surprise that Joe’s gathered such a following, although Instagram only allows users’ to post short videos, Joe manages to pack a whole recipe into a 30-second time slot. “Instagram definitely changed my life, without it I never would’ve built up this following, had a book deal, and I wouldn’t have had the chance to do all these amazing opportunities.”

Through his highly energetic personality, simplistic cooking and comedic approach it’s clear to see why Joe’s become such a success, he’s pretty easy on the eye too, which is an added bonus for his followers and clients, yet he tells us his first videos were “really boring and quite monotone” which is hard to believe from the enthusiastic posts that he’s shared of him shouting out his kitchen window.

His videos are ingenious; from perfecting throwing a bag of Uncle Ben’s rice across his kitchen straight into his microwave, which took him an impressive “two or three times to nail” to renaming broccoli ‘midget trees’, it’s Joe’s honest approach to a healthy lifestyle that has seen him embark on book tours and even had his own TV show which aired earlier in the year.

“My first TV appearance was on Sunday Brunch, it really helped me to build a bigger following. I gained about 15 to 20,000 followers in one day. I was also on This Morning; I was really nervous when I started doing TV appearances, but I enjoy talking about what I love so that makes me feel more confident. Having to talk to a crowd of 300-400 people was also challenging as I’m not a great public speaker, but I’m passionate about what I do.”

And passion is what has made people ditch the traditional dieting plans; instead, individuals are turning to Joe to sign up to his 90 Day SSS Plan – that’s Shift, Shape and Sustain in case you’re wondering.

The plan is tailored to the client and is designed to help them take a new approach to a healthier lifestyle. Suitable for all ages and fitness levels and it has already transformed more than 100,000 people worldwide since launching in 2014. “It’s bespoke,” Joe says. “We have 62-year-old women and 18-year-old men doing it.”

With his business developing at a rapid pace, Joe now has 45 people working for him, who are assigned a client who they support through the three stages of their plan. “There’s been really crazy growth within my company,” he tells us. “My vision is to help one million people in five years and I can’t do that on my own. I’ve hired people that are passionate about what they do. There is a plan development team and also each client has their own support coach.”

The plan isn’t cheap, and it take’s a lot of hard work and dedication, but the end results, which some clients have allowed Joe to share on his Instagram and within his books, are inspiring. After signing up to the plan, each client is sent a detailed questionnaire which they send back to their coach before receiving Cycle One, the first stage of the 90 Day SSS Plan.

That being said the plan is different from the stereotypical crash diets. Joe wants to change people’s attitude towards healthy eating, encouraging them to ditch the scales or the ‘sad step’ as he calls them. Most importantly, he’s trying to educate people to help them understand that losing weight doesn’t mean you have to avoid calories and fats.

“There’s no real perfect diet for every person. You can eat carbs, they aren’t the devil and fat is an essential for your body. I don’t believe in low-fat or low-calorie diets, as long as you’re eating at the right time, eating the correct proportions and training hard then you probably can eat more than you think.” 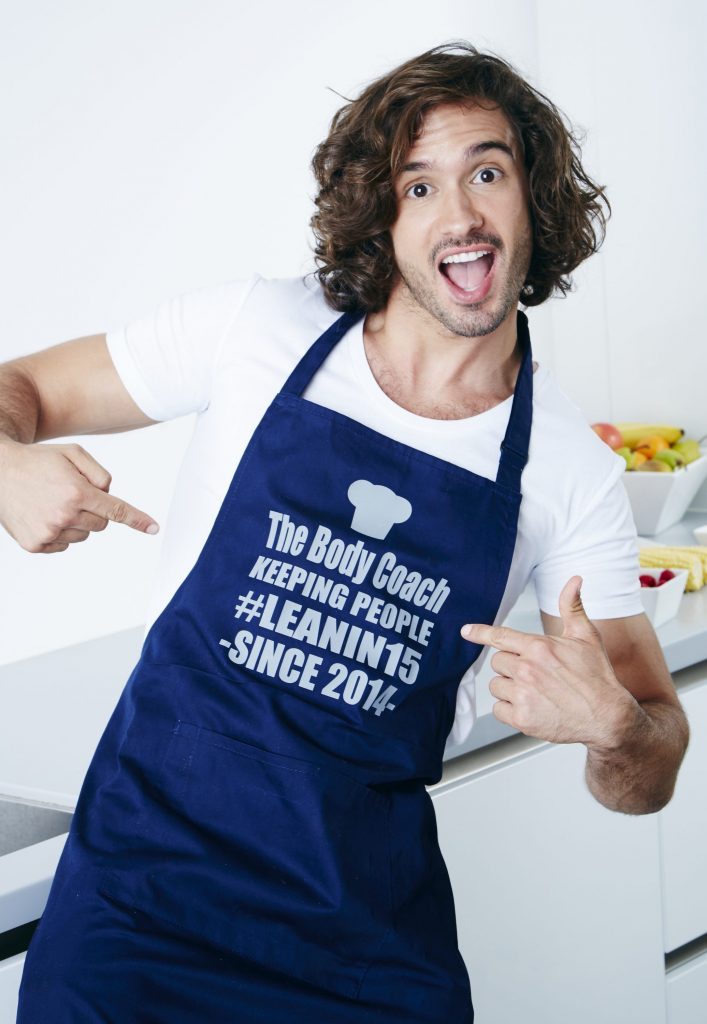 Joe’s latest book, Lean in 15: The Sustain Plan is packed full of delicious recipes that are simple to cook. It follows up from the two previous instalments, which contain recipes to help you shift your weight, and shape your body whether you’re aiming to get abs like Joe’s or want to lose your post-Christmas beer belly.

The key to succeeding at the plan is quite simple: eat the right foods; drink lots of water; train like a boss. Most importantly, Joe tells us it’s important to avoid the processed foods, as they “spike your blood sugar and your body ends up craving them, like an addiction.”

“For Cycle One we only do HIIT, for Cycle Two and Three, it’s a mix of HIIT and weights,” he adds. “After the 90 days of training some will go back to the start or some will carry on with the new 30 Day CS Plan, where you’ll get new recipes and training plans. If you follow the plans and change your diet your body will transform. If you’re dedicated to making a change there is no way you should go back to the way you were before.”

The meals are delicious, and you won’t be living off salads or depriving yourself of essential fats. Joe’s favourite recipes from The Sustain Plan? “I really like Joe’s Beef and Mushroom Pie, it’s perfect to cook for the family, and I love filo pastry. I also like the Smoky Joe Burger; there are a few nice curries in the book too.”

What we love about Joe is his honesty, he doesn’t shy away from the fact that he enjoys a good burger every now and then. Scrolling through his Instagram feed there are pictures of Nutella cheesecake and Cornflake crusted French toast – which Joe states in the caption is “Not in association with #Leanin15.”

“My favourite thing in the world is to go for nice cocktails and meals with friends, maybe even to go away for the weekend too. I think people like to see the real side to me as they can relate to it. I made a Facebook live video where I had a really bad weekend of eating and I listed everything I ate, loads of people were responding saying it was nice that I shared it because it makes me look human. I was just being honest but it’s a really good example of what certain foods can do to you.”

Get 50% off at Edgbaston Priory Club