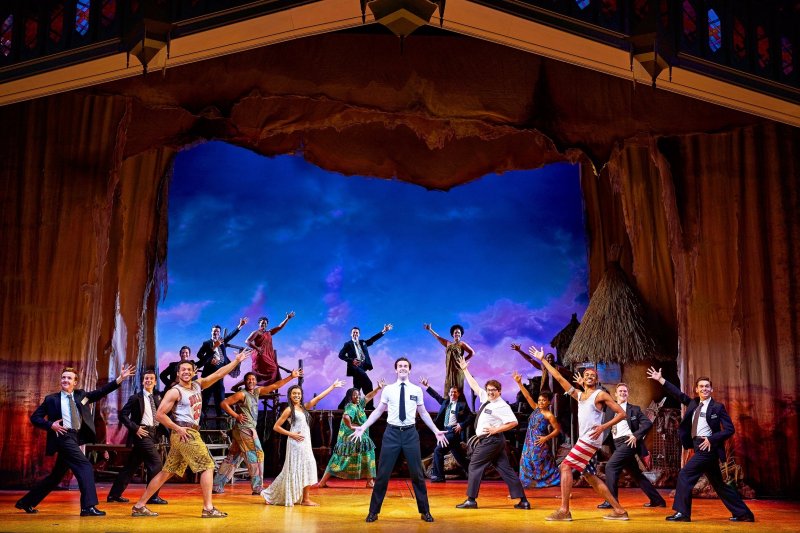 In 2011, The Book of Mormon made its debut on Broadway and went on to be a huge success that its creators just didn’t see coming. Watched by 17 million people worldwide, it’s evolved into one of the most recognised productions in showbiz that has seen it receive some of the most prestigious awards in the industry, including four Olivier Awards, nine Tony Awards and become the fastest-selling show in the West End’s history.

The brainchild of South Park creators Matt Stone and Trey Parker, and songs from EGOT (Emmy, Grammy, Oscar and Tony) winner, Robert Lopez, who has penned songs from Disney’s Frozen and comedy musical, Avenue Q, The Book of Mormon is far from the typical musical as it gets.

Following the adventures of two mismatched Mormons, who, at the tender age of 19, leave the promise land of Salt Lake City and embark on a journey to spread their knowledge and beliefe with the people of Uganda, yet all is not quite what it seems when the pair arrive for their two-year residency in hopes of baptising more people into the religion.

Ahead of it coming to Birmingham Hippodrome from March 4 – 28, I took a trip down to Bristol Hippodrome to get a sneak peek of the show and have a chat with the cast to find out just what it is that’s got everyone raving about what is dubbed as ‘the funniest musical of all time’.

The thing about The Book of Mormon is that it’s brilliantly clever. Despite is devilishly dark humour which features everything from Aids, sexuality, rape and poverty, it homes in on the importance of friendships, cultural differences beliefs, creating a balance that makes the show impossible not to love, no matter where in the world it’s playing.

“The show is just so universally funny and great that I think that it works anywhere,” says Robert Colvin, who plays the lead of Elder Price. “There’s strong language in the show and some challenging themes, of course, but there is an amazing message at the end. It’s so heartfelt in spite of some of the language in it.”
What is probably the most triumphant part in Mormon’s storyline is the beautiful friendship between the sometimes over-confident Elder Price and his mission brother, the adorable Elder Cunningham, played by Conner Peirson. 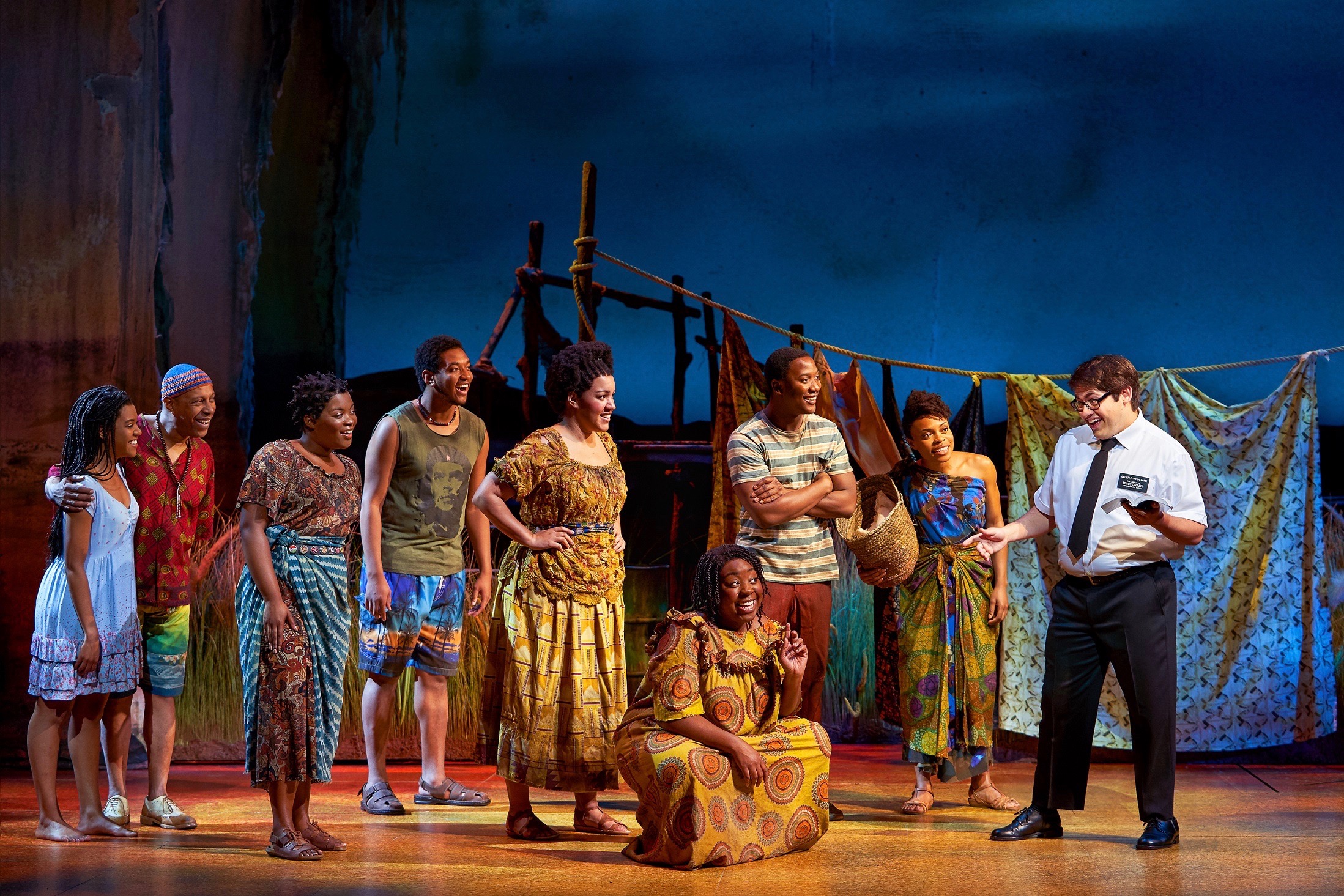 Conner Peirson and the company of The Book of Mormon. Credit: Paul Coltas

“He’s also just blindly optimistic,” Conner says of Cunningham. “I think in a lot of ways he believes the same things as Elder Price, that if he is a good person things will turn out for him; it’s just his view of the way that things do turn out are vastly different from everyone else. It’s really fun to have to watch both of them deal with the harsh realities of culture shock, it’s such a fantastic part of the show.”

And while Elder Cunningham is simply working to find his feet in the world, his buddy, Elder Price is the a-star student whose faith is challenged when things simply don’t go his way.

“He’s had it all promised to him,” Robert says. “He’s been told he’s going to go on to achieve amazing things in the world of Mormonism. He has a plan for his life and he goes on a journey through the show where that’s challenged and he has to adapt and do a lot of growing up.

“The character himself throughout the show has to pick himself up a lot. There are moments where he thinks he’s got everything sorted out and then he gets knocked down and has to build himself up, and I admire that about him.”

The pair have some comedic duets throughout the show, and notably, the songs are tainted with lyrics that you at first you find yourself feeling almost guilty for laughing at. While the toe-tapping opening number, Hello! may appear innocent, granted it is one of the lesser hard-hitting tracks, it isn’t long before you’re heading audience members taking a sharp intake of breath as the darker themes creep in the more notable numbers Hasa Diga Eebowai and Spooky Mormon Hell Dream. 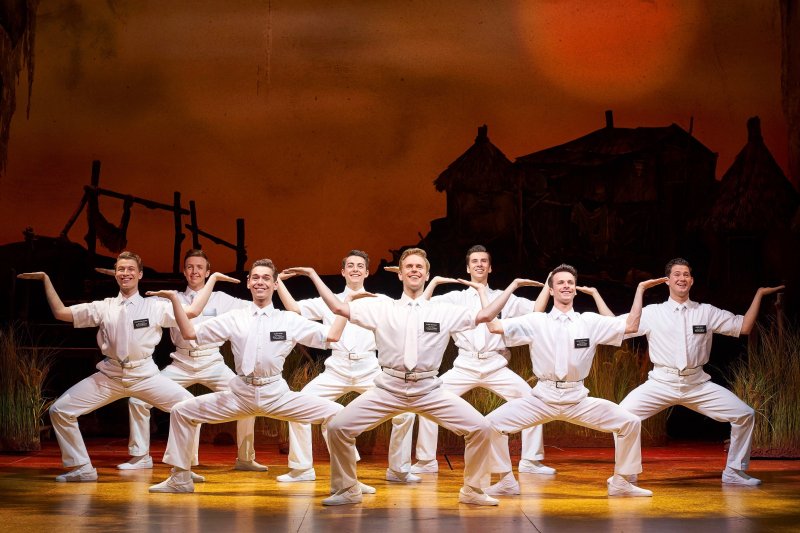 The company of The Book of Mormon. Credit: Paul Coltas

Yet there’s is something fascinating about The Book of Mormon in that it manages to be both heavily outrageous in both its storyline and lyrics, but has the full works of what you’d expect to see from any other successful musical. It shines the spotlight on the Mormon religion, while poking fun at Americans, and has you laughing from curtain up to curtain down. Overall, it’s a cracking night out that in this day and age, we all need every now and then.

“I think people forget what a spectacle it is; it’s all-singing, all-dancing, a real classic musical,” Robert says. “The writers are obviously such huge fans of the old musical style and I think that’s evident in the show.”

Sitting down with the cast, which includes to Midlands natives, Ewen Cummins as Mafala Matimbi and Thomas Vernal as the General/Satan, I can’t help but ask how they’ve managed to seamlessly work their way through the show without cracking even a smile. They’re all quick to admit that both rehearsals and on-stage moments, even now, are challenging in the most comical of ways. 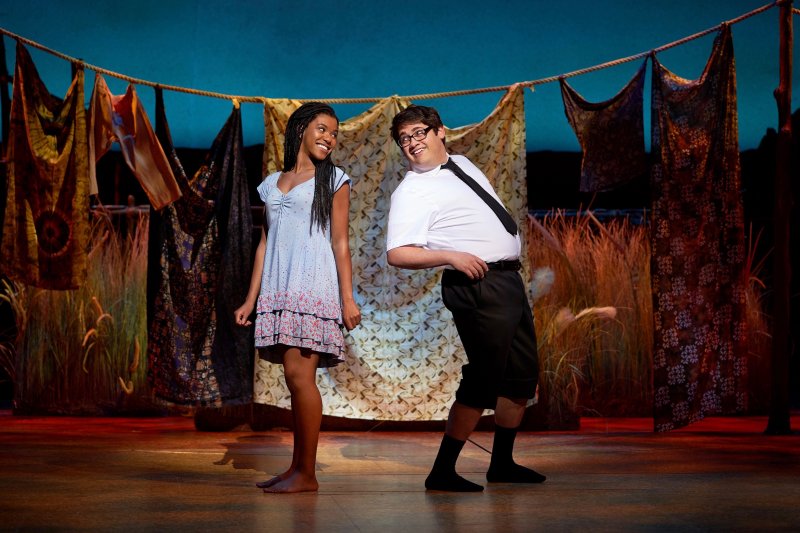 Nicole-Lily Baisden and Conner Peirson in The Book of Mormon. Credit Paul Coltas

“We rehearsed in London for four weeks and our director was very much like ‘laugh as much as you want now and get it out of your system because when you go on stage you can’t,” says Nicole-Lily Baisden, who plays Nabulungi. “Rehearsals sometimes were just a complete write-off. I laughed at the same points during every single rehearsal that we did.”

“What’s funny for me is that starting out, you find everything so funny, but because of repetition you learn to expect what’s coming so that you can prepare yourself,” Conner says with a smile. “What still gets me is that sometimes castmates will surprise you on stage by making a different choice and then you’re in trouble.”

“It’s live theatre as well so anything can go wrong,” Robert adds. “Someone can give you the line in a slightly different way and you have to take a second to adjust to that. I’ve always struggled and I’m a professional actor,” he says with a laugh.

The company of The Book of Mormon. Credit: Paul Coltas

My time is nearly up, so I round off our hilarious chat, which also led to one cast member’s very fitting frog phobia and how they plan to all spend their time in during their four weeks in Birmingham, with the very simple question of, why should people come and see The Book of Mormon?

“It’s shocking, hilarious and heart-warming,” Robert says after pondering for a moment. Nicole follows up with “hopeful, spectacular and togetherness.” Conner, rounds up with “It’s a heartfelt, surprising, riot that audience members should buckle up and prepare for.” If those aren’t good enough reasons to go along and see it, then I don’t know what is!

The Book of Mormon runs at Birmingham Hippodrome from March 4 – 28. Click here to book your tickets now!