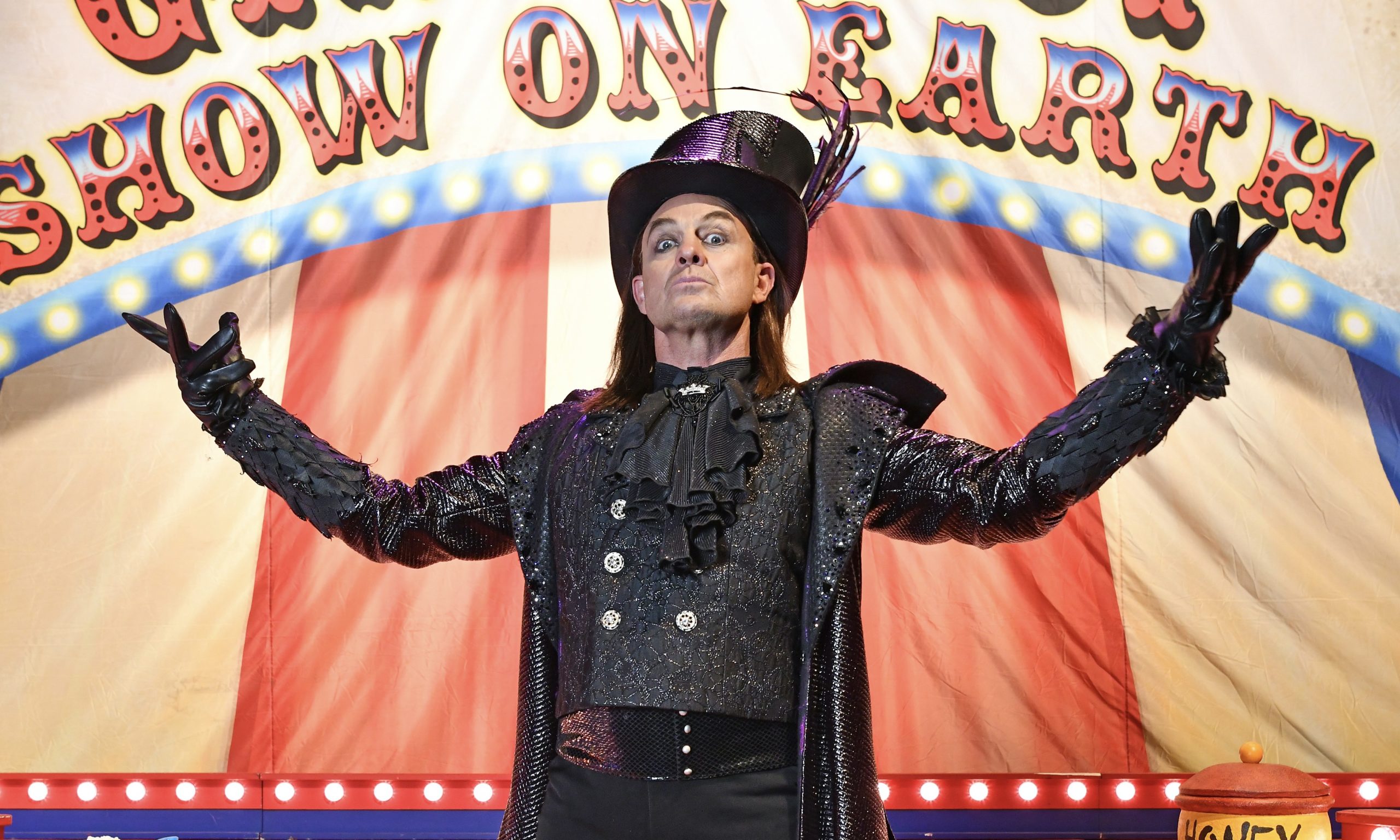 An interview with Jason Donovan

From Ramsey Street to the West End, Jason Donovon had been entertaining us for four decades on the small screen and stages around the world. We caught up with the former Neighbours star ahead of his appearance in panto at Birmingham Hippodrome 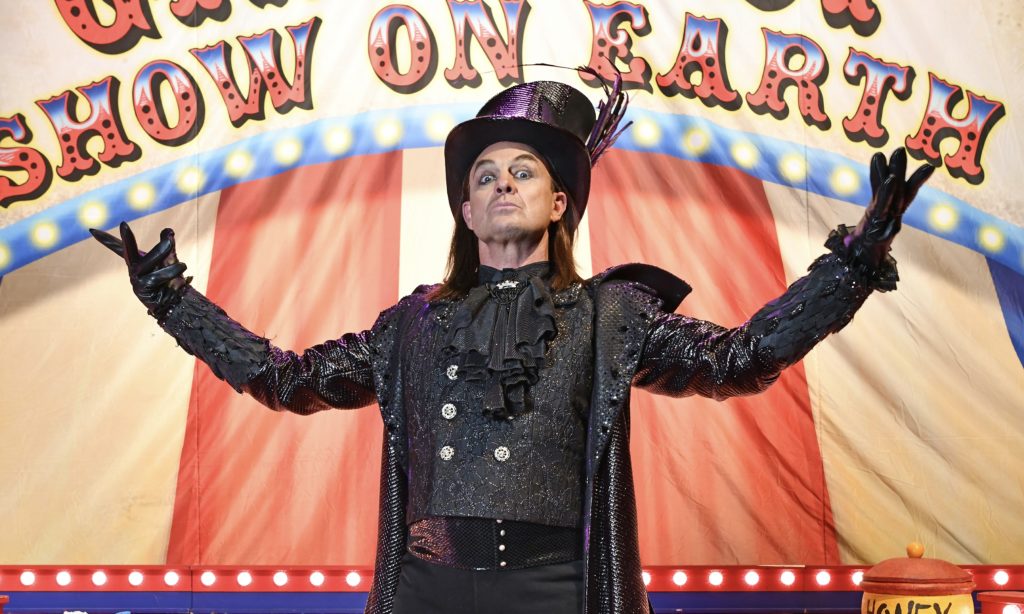 Jason Donovan as the evil ringmaster

Tell me more about your role in Goldilocks and the Three Bears:

Well, I play the evil ringmaste who’s out to destroy the circus and infiltrate the new star of the show and take the applause for himself. When I decided to do a panto I said to Michael Harrison (award winner producer, The Bodyguard, Annie and more), I’ll do it if I could play a character with a bit of meat to it and Goldilocks presented itself and ringmaster became part of that story. Panto is a very English thing, and I asked a couple of people what they thought, Dawn French came and saw Joseph and she had done panto at the Palladium, and she said ‘Christmas comes to you Jason’. So, I thought we’ve all had bumpy 18 months and it was time to embrace a bit of fun, not try and analyse things too much and just go out and do it. I don’t feel the pressure like I would in a normal gig.

How have you found the rest of the cast? Matt Slack is a bit of a hero in Pantoland in Birmingham? 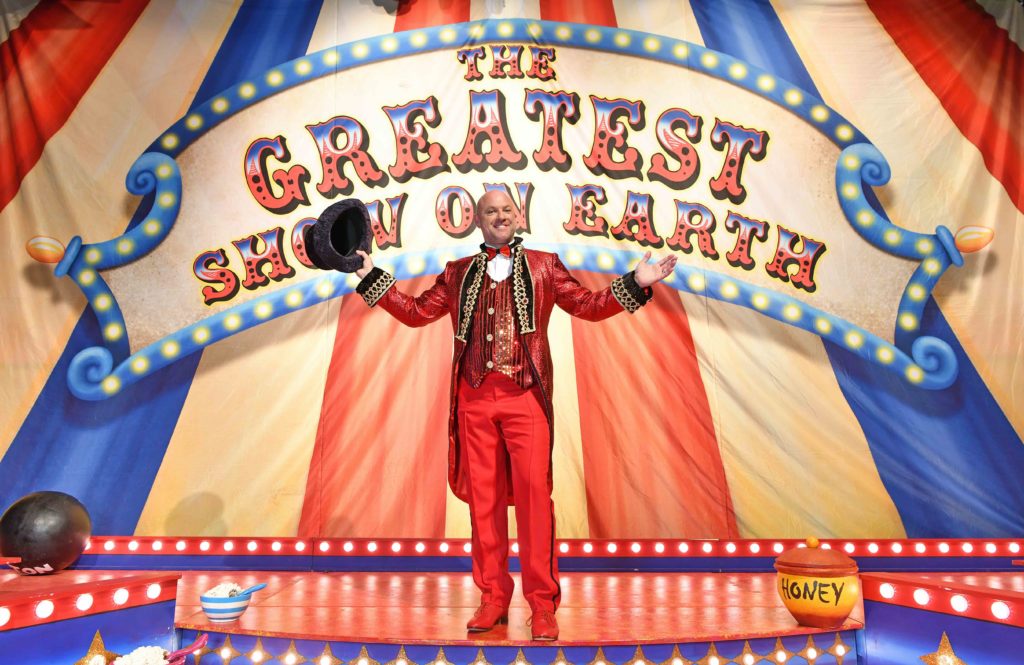 The thing about the Birmingham panto is it goes through to January, so it starts quite late for most pantos and finishes at the end of Jan. It’s an odd one! I know Matt has a good reputation and has a currency. I guess I’ll bounce of the loyalty that he has.

And do you know much about queen of the Black Country Doreen, and will you be able to understand her? 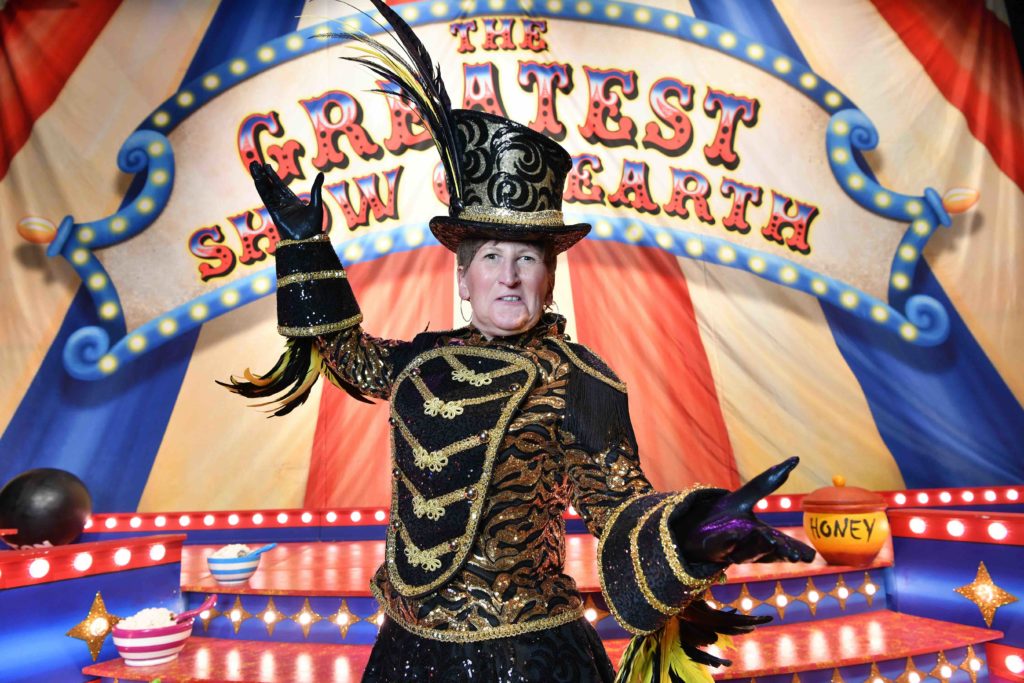 Doreen, the undisputed Queen of the Black Country

I don’t, and I’ll leave that space to be filled! I’ve met them all and they are all very warm and encouraging and we had a good press day. You know I think it’s going to be fun. It’s going to be hard work and I’m keeping my fingers crossed that it all goes to plan, shall we say.

You recently performed at Symphony Hall. How was that? 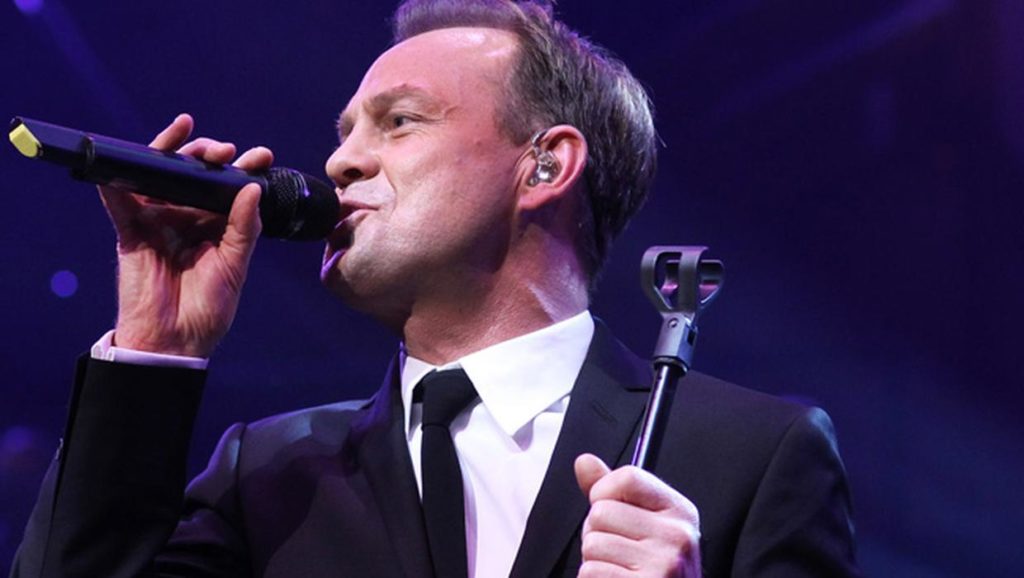 It’s always a great room to perform in. Birmingham and I go back a long way. It’s funny, when I did The Rocky Horror Show at the Birmingham Rep in 1998, I stayed in Birmingham for a while during that run, and I did King’s Speech out of Birmingham, so I have always been fond of the city and my band are all from Birmingham.

You’re quite familiar with Birmingham then? Have you noted how much has changed?

Yes, I have, the library and the area leading down to the Town Hall, and the Bullring and the station. They’ve bought some money in, and it’s certainly the better for it, I hope.

You have such a varied career and an incredible amount in it, and you’re producing Priscilla. Will you bring anything different to that as a producer?

I bring experience and passion. It’s an Australian story, so for me it was the perfect sort of entrée into that world. I did the show in London in 2011, and I’ve been associated with it since it was made into a film back in the early 90s. As a producer, there’s ‘Jason Donovan producer’ as a publicity angle, but I wanted to be real producer in the sense of being able to bring finance to the table, not just creative input and publicity.

And then you’re back in Joseph as a different character. You seem to have a long-term relationship with some of these shows: 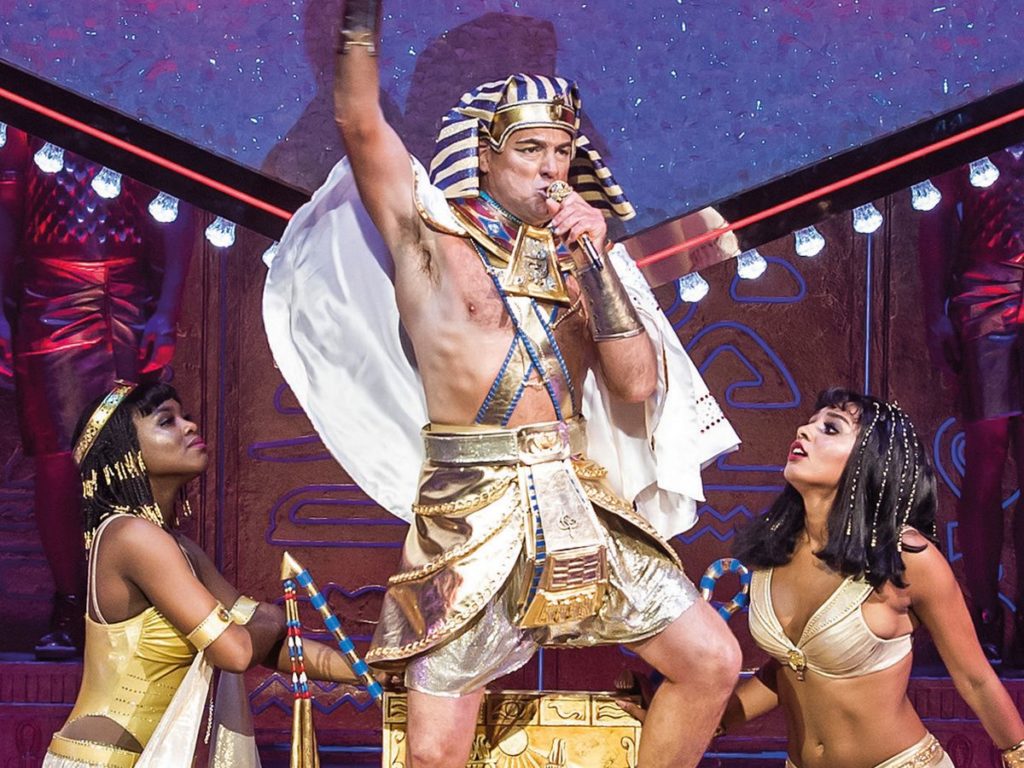 Yes I do, and I enjoy that. The two titles that you’ve just talked about are close to my heart so I think as a punter, someone who invests in coming to see a show that I’m in or that I produce, knows that it comes with a certain amount of gravitas to it. It’s a bit like when you buy a Johnny Depp film, you know what you are going to get.

Neighbours launched so many careers: you, Kylie, Alan Dale, Chris Hemsworth (Thor), Russell Crowe, Guy Pearce and many more. It’s quite staggering – why do you think this happened? 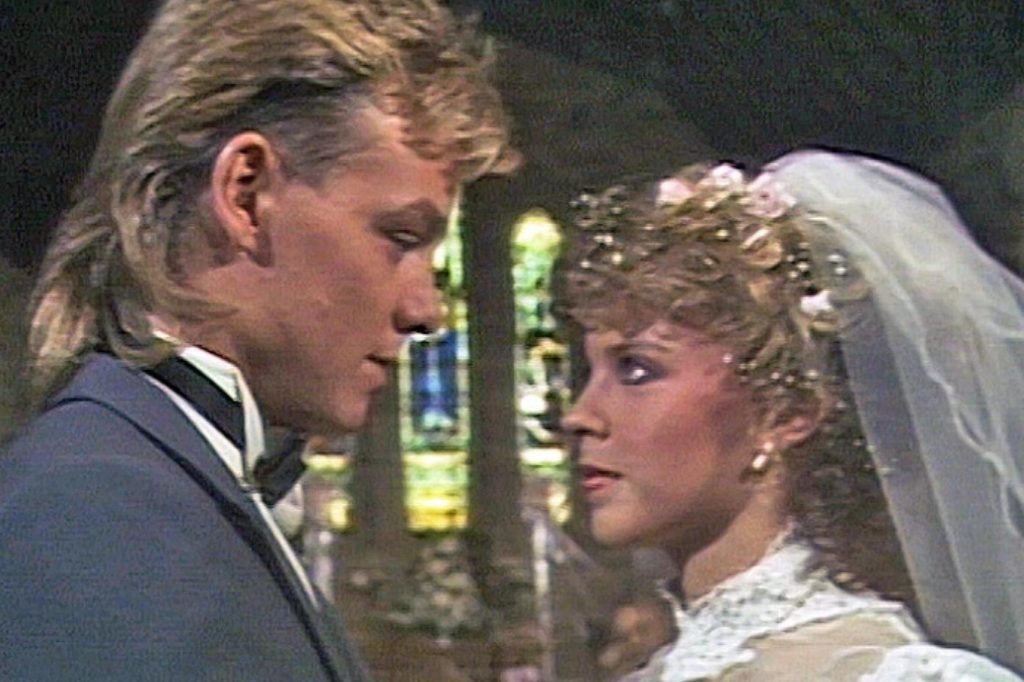 Jason and Kylie in Neighbours

I don’t know, but I think there was a certain chemistry in that cast. I think if you look particularly at the younger cast, people like myself, Kylie, Guy there was a lot of experience when it was starting to take-off. I had done work in my early teens on television in Australia as had Kylie, and I think it was just timing. You know, I don’t believe in luck, I think you create your own luck, but I believe timing has a lot to do with everything and Neighbours just came around at the right time, with the right cast.

You’ve also been in the jungle, Strictly, Dancing on Ice. How did you find these more competitive shows? 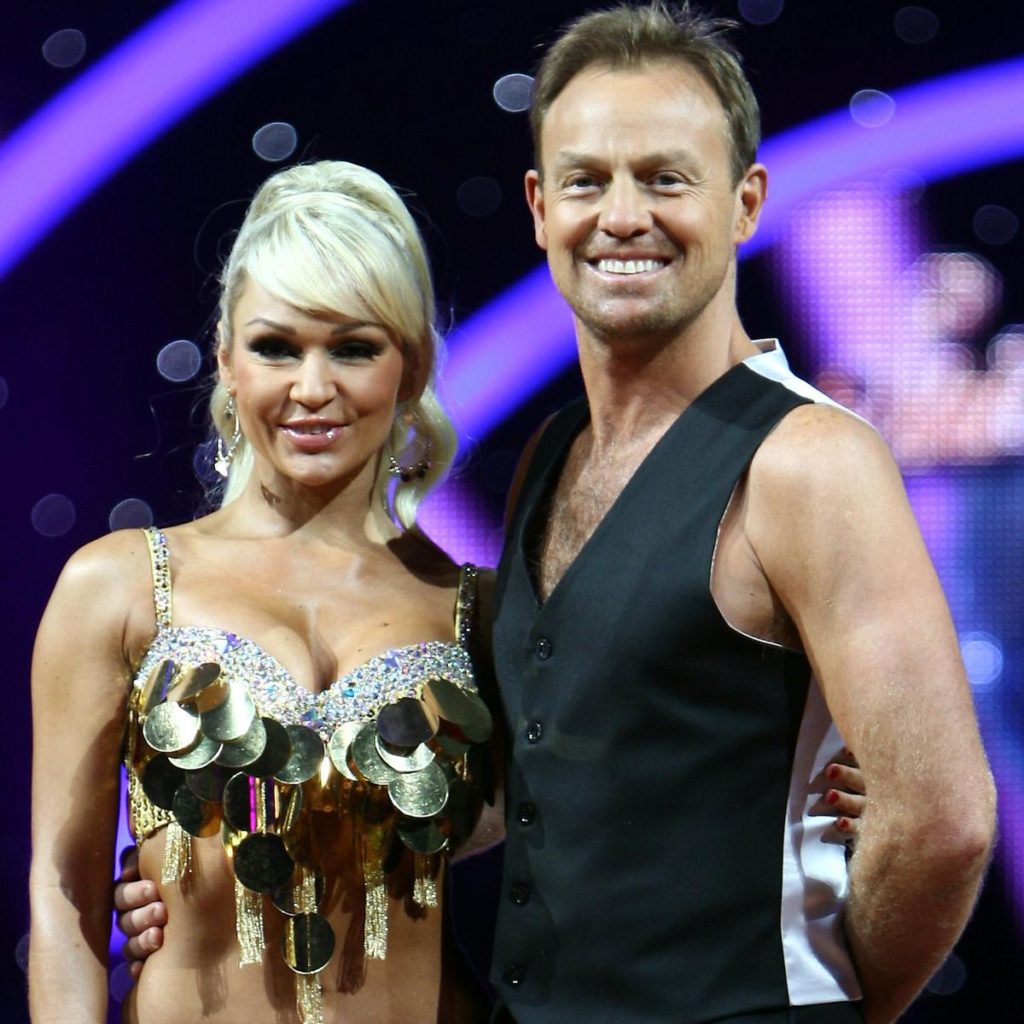 Something like Strictly or  Dancing on Ice, those things you take on because you’re taking on a skill as well. For me, doing something like Strictly for example was quite a strategic move because I’d just come off Priscilla and Sound of Music and I could use that dancing skill in my work. Also, there’s the profile of the show. Strictly is an institution in this country and it creates stars or it reaffirms your place in popular culture. I think Dancing on Ice is a little bit different for me. We’re in a pandemic, I was offered the chance to do it and maybe in a normal year it wouldn’t have been it because of the danger aspect. It’s quite a dangerous show to do, but it’s a skill-base show and my diary was open so I went for it.

You’ve been busy for decades, what keeps you driven?

School fees! Having my kids was a sort of turning point. Up until that point I was doing it for myself, and then I started to have this family. I cleaned up my act a little bit too, and there’s my passion for working. I’m lucky; I pinch myself, I honestly do. Even though sometimes I’m exhausted; I’m a bit of a workaholic I think; but I’m a workaholic because I love what I do. I’m one of these lucky people in life to have found my passion and I make money out of it, so I enjoy going to work. Ironically, people come and see you at work, people want to see your show, and I’m really, really blessed that this was the path I took 40 years ago and I’m still on it.

You touched on there that you cleaned up your act, and you’ve had some well documented personal challenges. Whilst I won’t dwell on these, do you have any advice for anyone who finds themselves in the same position?

You have to want to change in your life, and I don’t care who you are, we all go through bumpy moments and I guess all I would say for me, coming out of that sort of darker period, I now know what I don’t want to do. Secondly, I’ve always kept pretty fit physically, and that was a reminder of where I needed to be. So, even though I strayed a little bit from reality for a while, I always had that Australian outdoors ‘get up and go’, body, fitness, health, and then also I had my passion and my work. If you are talking specifically about drugs, you’ve got to want to change. It’s very simple, if you don’t want to change it’s not going to happen. This applies to alcohol, this applies to drugs, this applies to sex, this applies to work. We’re all a sort of beast at something. Some people I know are addicted to working all the time and they don’t enjoy their lives because they are so obsessed by it, so it’s not just the obvious sort of things that you might think are luring us into the darkness. Life is a balance. I don’t know many people who don’t have moments of self-confidence doubt and selfishness. It’s just got to be proportionate I suppose.

This panto is going to take you away from your family, it’s quite a full-on schedule. How are you going to work around that for the Christmas period?

I can get away if I need to so I’m not away for a long period of time. I always get home once a week anyway. It’s six weeks. I’m an Australian, I love Christmas, I’ve got a 21-year-old and a 20-year-old, my ten-year-old I think is starting to work out a little bit more about Christmas than she needs to and, in all honesty, I don’t know how I feel about that, but I think I’m going to give it a try.

So, what are you doing Christmas Day, will you be back in London?

We’ve got a place out of town, so I’ll probably be there.