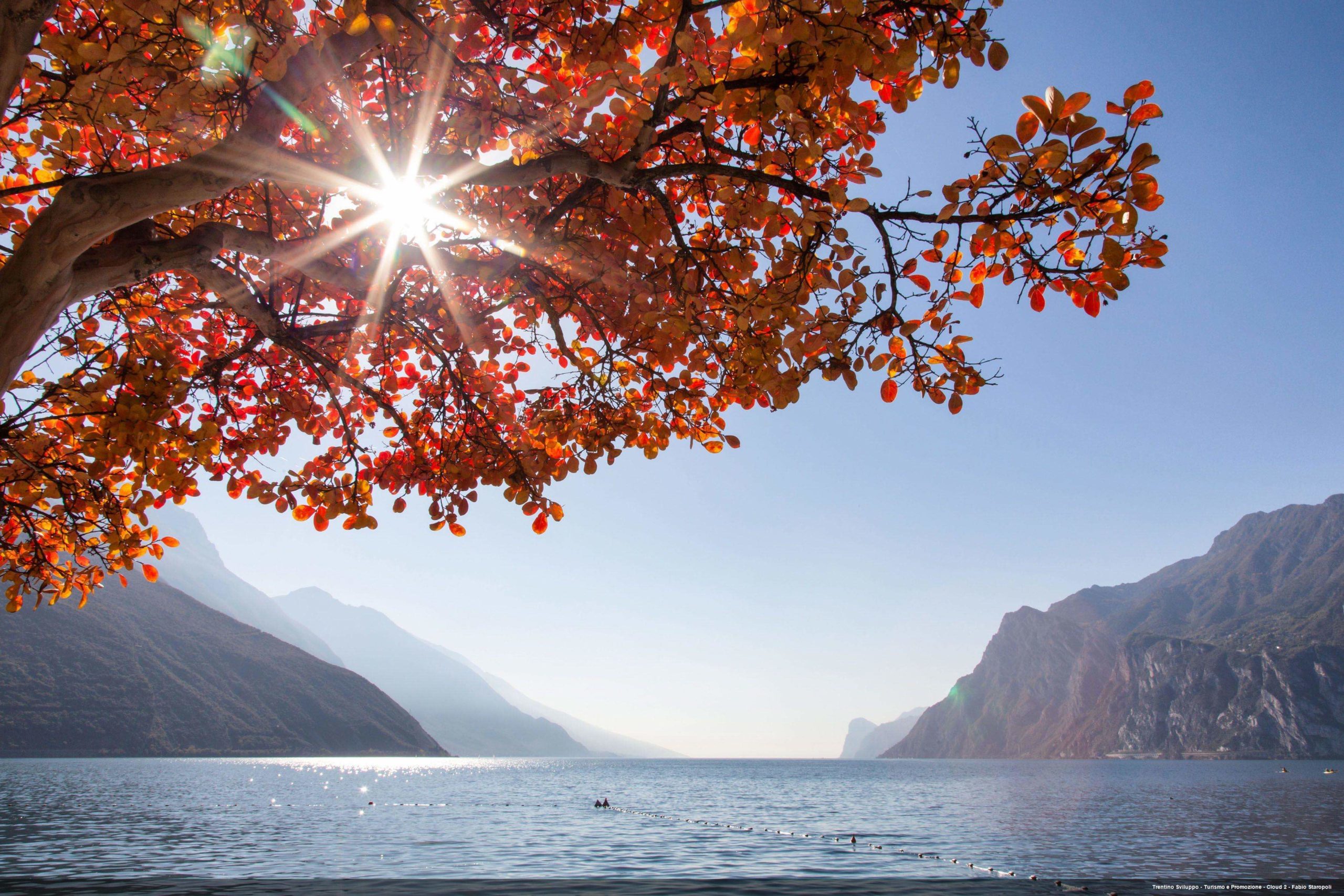 By Andrew RileyOctober 20, 2020No Comments

From the northern tip of Lake Garda, to the Dolomite mountains, the region of Trentino in northern Italy makes for the perfect Autumn escape to reconnect with the outdoors, take in the crisp mountain air and observe nature’s most colourful season. 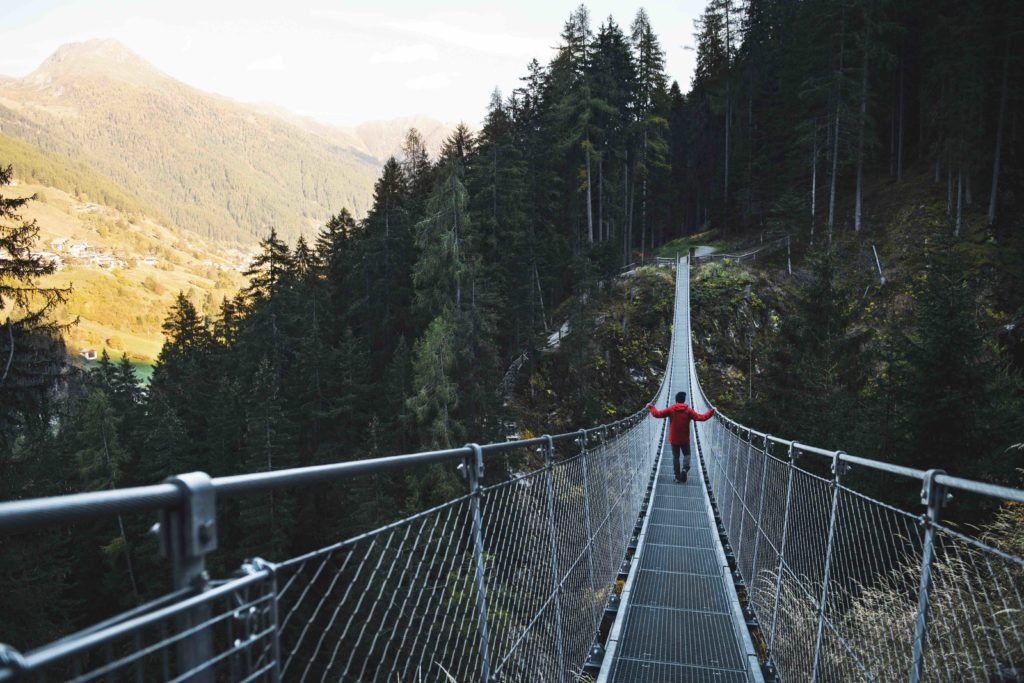 Home to 297 lakes, over 5,000km of trekking trails and 500million trees per 1000 inhabitants, there are plenty of leaf peeping routes across the region for visitors to explore on foot and here are just a few recommendations for Autumn enthusiasts: 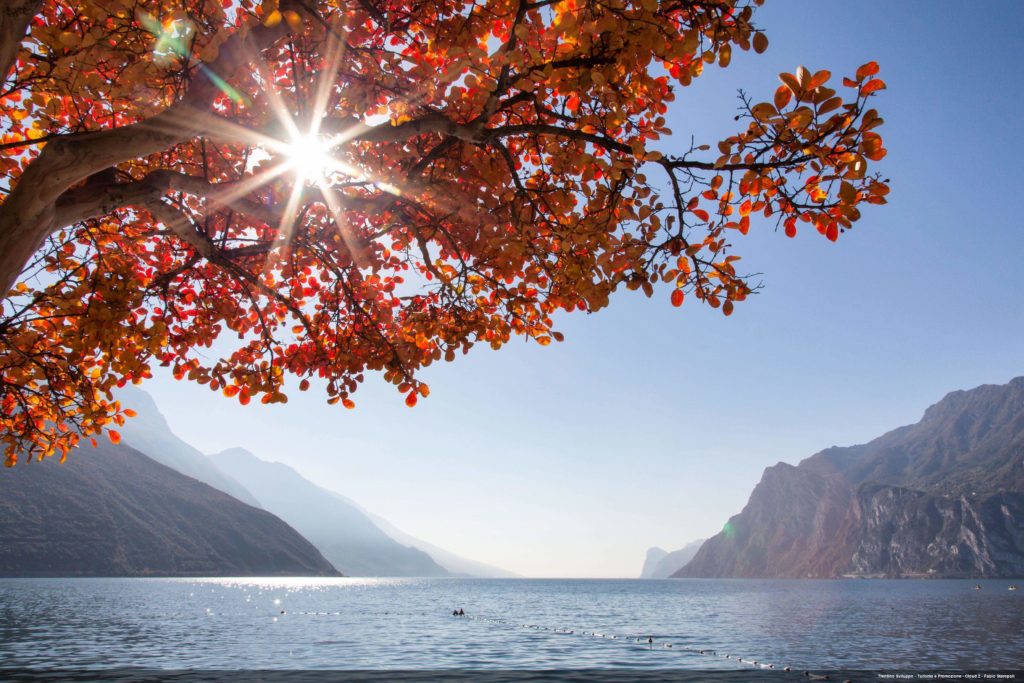 Garda Trentino is a riot of colours in Autumn as the woods and mountain slopes around the lake transform into vibrant golden landscapes. Lago di Tenno, offers unforgettable views and from the nearby medieval village of Canale di Tenno, visitors can walk towards the beech forests of the Sella del Calino and stop off at the nearby San Pietro cabin. Alternatively, the trails that climb from Nago to Monte Altissimo offer panoramic views of the changing of the seasons. 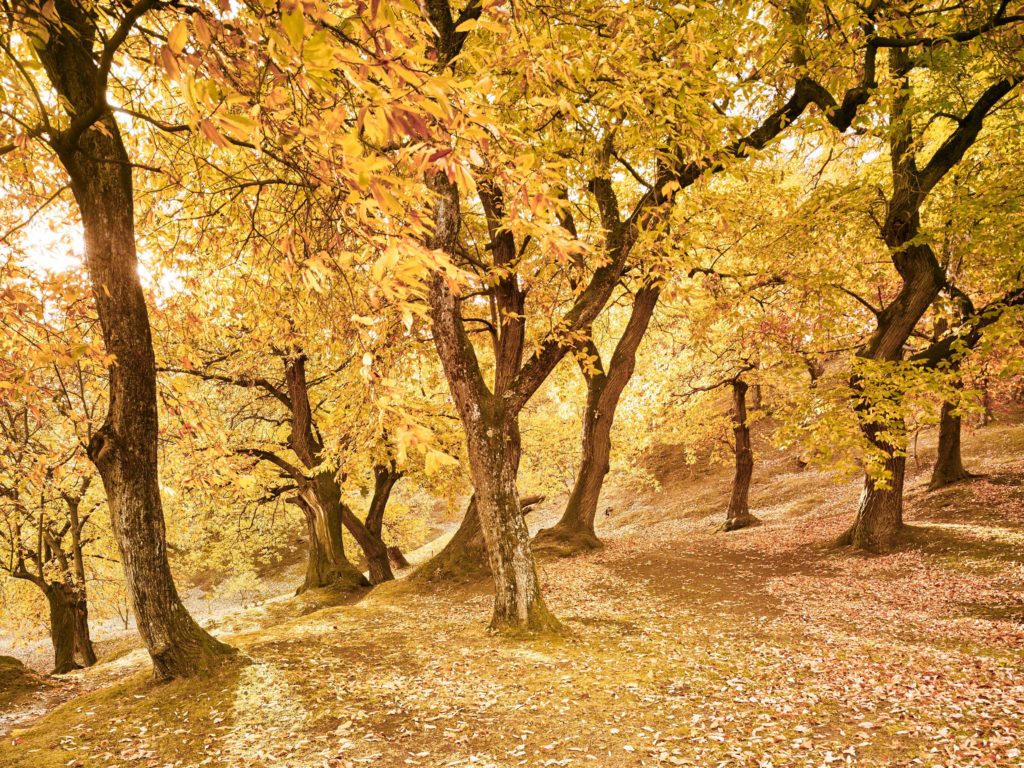 Above Vallagarina, walkers can stroll among the beech and conifer forests that surround the small Lago di Cei. There are plenty of photo opportunities on the trail around the lake and along the path through the woods which leads to the ancient church of S. Martino in Trasiel, originally built by barbarians on the remains of a prehistoric fortified settlement.

The Altopiano della Paganella plateau offers an easy yet variable trail among the beech woods near the quaint village of Fai that is suitable for all levels. Starting from La Capannina, this route takes in a series scenic spots overlooking Valle dell’Adige reaching the Grotta della Madonna and the Rhaetian archaeological site of Doss Castel.

To experience the autumn foliage in Trentino in all its glory, budding mountaineers can also climb Monte di Mezzocorona which overlooks the Piana Rotaliana north of Trento. Take the cable car or follow the path (SAT footpath no. 500) on foot and reach the top in around 1h45m. This route starts at the station in the valley and leads all the way to the panoramic terrace at the summit. A more adventurous option is the via ferrata that scales the Burrone Giovanelli ravine and where climbers will ascend alongside a spectacular waterfall. Once on the mountain, a new trail leads visitors through beech and fir forests to the Malga Kraun cabin, where they can sample traditional Trentino dishes. From the cabin, a path named ‘La magia del bosco’ (‘The magic of the forest’) takes walkers on to the ‘Candelabra’, a gigantic centuries-old silver fir tree that has become a living monument. 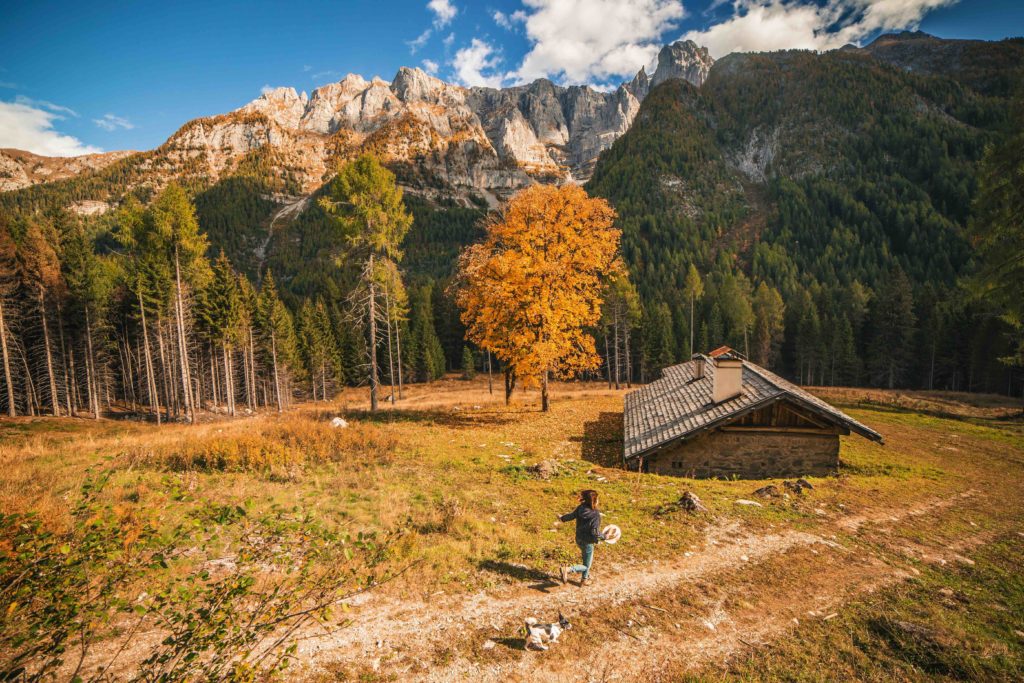 In Trentino’s Adamello Brenta Natural Park, the valley and Lago di Tovel have plenty to offer visitors in autumn when the colours are particularly dazzling in the dense forests that surround the lake. As walkers climb to loop around the rocky spur above the lake’s eastern shore its crystal-clear waters reveal traces of a submerged prehistoric forest on the lakebed. In Val Rendena, within the Park, visitors can follow the trail that climbs from Carisolo to the hermitage of San Martino among the rich tones of the larch and beech trees. Legend has it that the spot was once inhabited by one of the last hermits, who survived thanks to a tame bear that brought him bread. On the way back to the valley, take in the small church of Santo Stefano whose frescoes designed by Simone Baschenis depict Charlemagne’s legendary journey through Val Rendena. 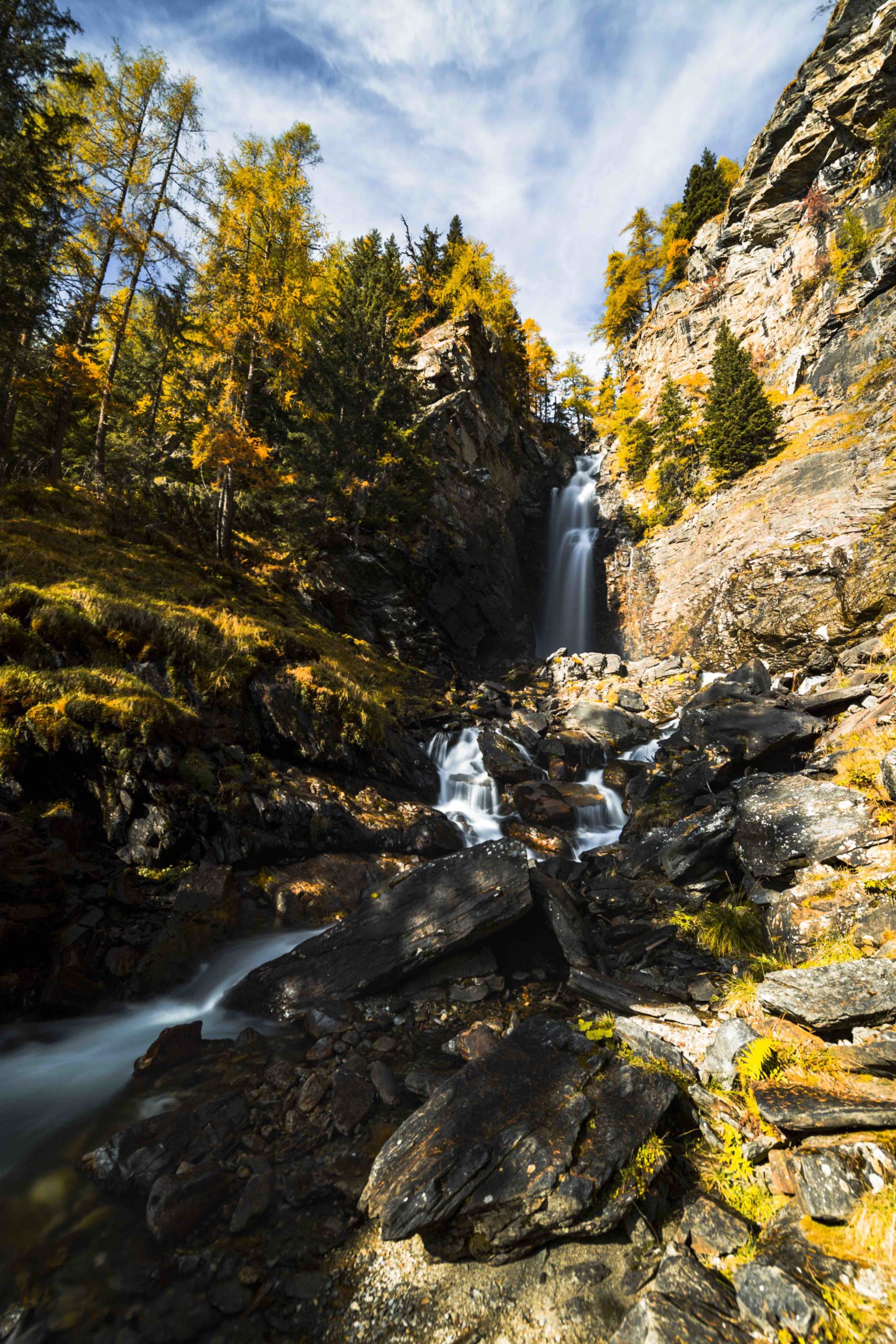 In Trentino’s Stelvio National Park, visitors trekking in Val di Rabbi can discover Saènt, a ring of spectacular waterfalls formed by the Rabbies river. From the Prà di Saènt above, walkers can reach the monumental larch staircase, a natural sculpture formed by the larch trees within the park’s woods.

In Alpe Cimbra, one of the largest alpine pastures in all of Europe, located between the cities of Trento and Rovereto the charm of autumn is intertwined with history. Among the lively hues of the beech and larch trees, visitors can relive the stories of the WWI soldiers who manned Wolf’s Gorge – the Wolfsschlucht – a long and intricate trench fortification that dominated Valle di Terragnolo between Serrada and the Dosso delle Somme fort. Now, a hiking trail retraces the trenches in their entirety thanks to an operation focused on recovering and preserving military history in the region. 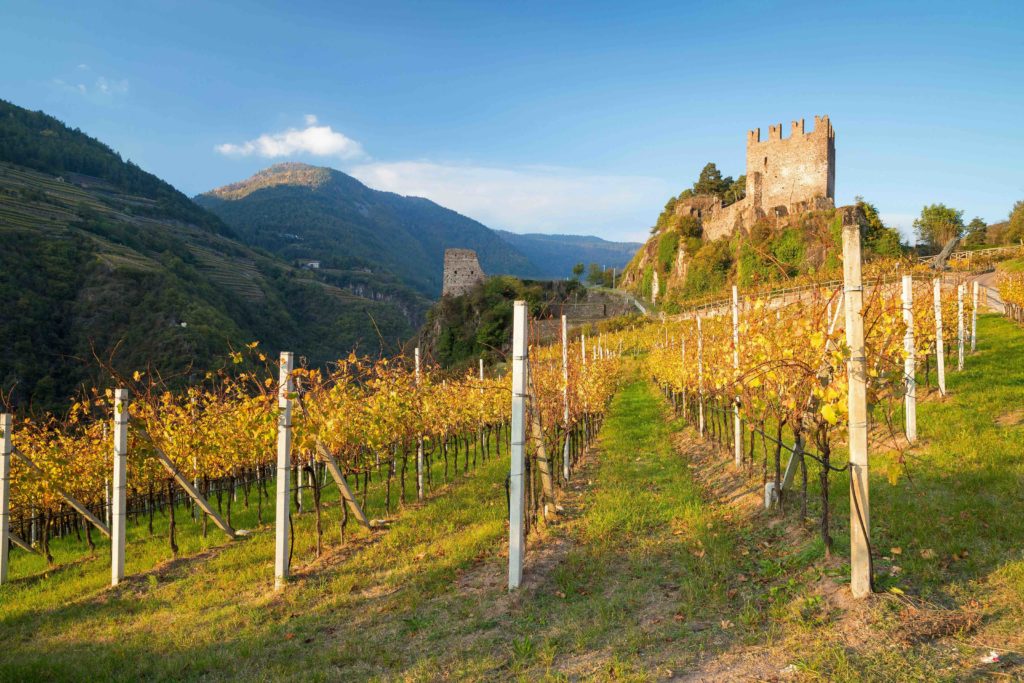 Val di Cembra, with its unique spectacle of terraced vineyards that turn golden during the autumn season, offers numerous trails for leaf peeping. Walk along the ‘Dürerweg’, traversing the vineyards to the Castello di Segonzano, or follow the signs for the European E5 long-distance trail among the changing woodland colours from Lago Santo di Cembra to Passo Zise and admire the vineyards from above. In this valley lies the Potzmauer shelter, where walkers can make a pitstop to enjoy a menu of locally sourced and seasonal produce.

At the foot of the Pale di San Martino and above the village of Mezzano in eastern Trentino lies Valle di Primiero, a themed trail leads walkers up to the grassy plateau of Prati di San Giovanni, home to a collection of farms and a small church dating back to 1512. Starting at the foot of Cima Cordognè, this route offers spectacular views of the Pale di San Martino mountain range, the wild and rugged peaks of Vette Feltrine, Monte Pavione and the turquoise waters of Lake Noana; which can also be admired from the 70-metre-long footbridge in Val de Riva.

So as winter approaches and we look to the peace and quiet of nature to heal our minds and bodies in these challenging times, Trentino offers the ideal remedy this autumn for walkers to embrace the great outdoors with this series of leaf peeping trails to be discovered.

For information on visiting Trentino go to www.visittrentino.info/en

You can enjoy a taste of Spain or Italy with one of our Exclusive hampers: