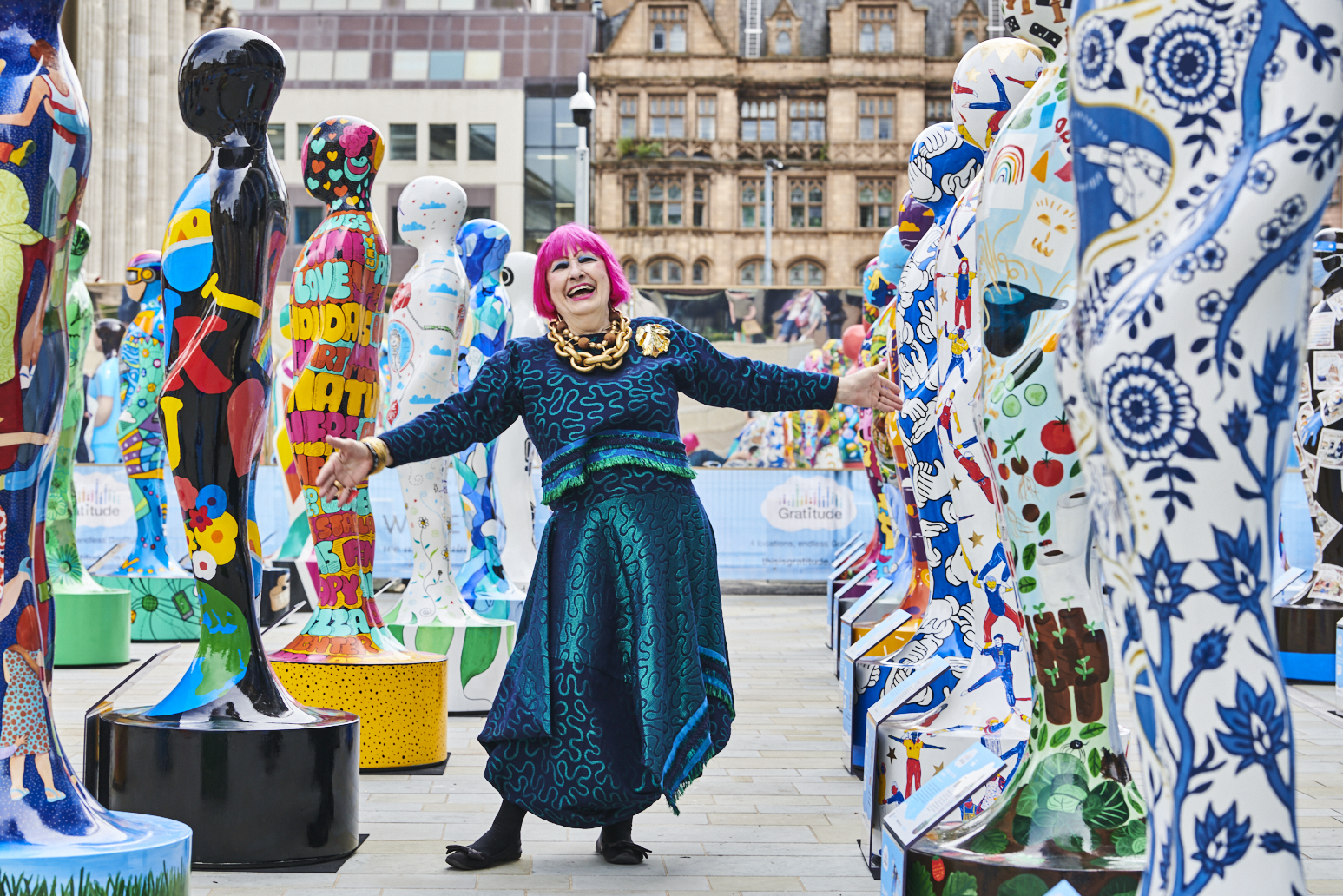 As one of the UK’s most famous fashion figureheads, Dame Zandra Rhodes has been at the forefront of style for more than 50 years. A pioneer of the British fashion scene since the late Sixties, she has collaborated with some of the biggest brands in the business, from Valentino and Topshop to her latest project Zandra Rhodes x IKEA. She is currently creative ambassador for Gratitude, a vibrant public art installation which launched its UK tour in Birmingham last week. We caught up with the dynamic designer to discuss her favourite sculptures from the exhibition, sustainable fashion and meeting Diana Ross. 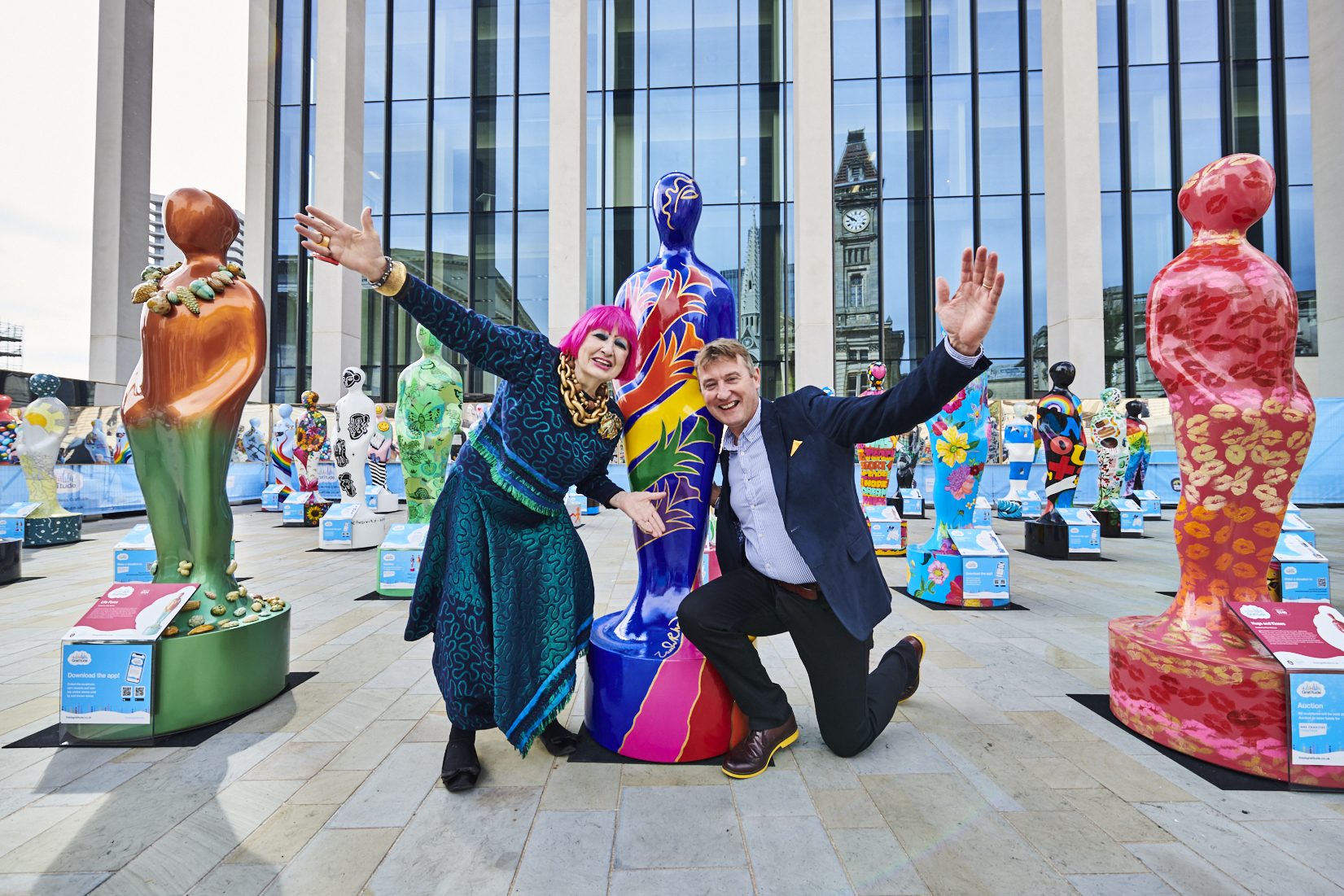 Zandra Rhodes and Charlie Langhorne, Co-founder of Wild In Art

Tell us more about Gratitude and your involvement?

Charlie Langhorne, (organiser from Wild in Art) came to me and said “would you like to be involved” and I thought it’s such a fabulous idea; as we come out of COVID, isn’t this a positive way to mark this moment and pay homage to the NHS and other frontline workers. It’s also fabulous that it has been launched in Birmingham. I mean the fact that we’re surrounded by complete grandeur here in Chamberlain Square, we need to treasure this city and we don’t do that enough, and something like this helps to point that out.

Do you have a favourite sculpture from the exhibition?

What I like really is that they’re all so different with each one making a different statement. Mine is one kind of statement, that’s because I’m trained in the dress business so it’s a bit more ‘airy fairy’ with flowers and rainbows; but then you’ve got the ‘Spiral Stardust’ piece by renowned sculptural artist Andrew Logan, with all the mirrored stars on it. Then there’s Kate Malone, who is one of the top ceramicists in the world and has lovingly stuck bits of her pottery all over her creation. Kitty Joseph, who creates wonderful rainbow clothes, has imagined a sort of a rainbow effect around her sculpture, and then Piers Atkinson, who I’ve known for years since he was a young student, has done wonderful kisses. And a man today, who worked for the NHS, has had his head painted on the front of one of the statues. Everyone has given a different take on it and that’s what’s so good, you can walk through and see the different aspects that they’ve picked up. 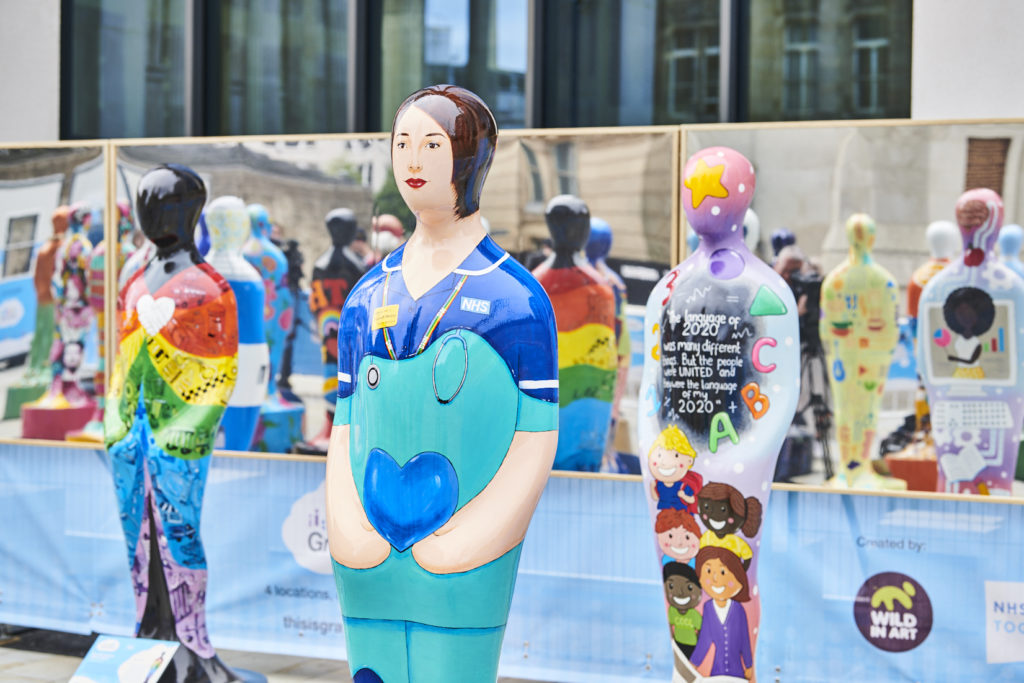 What legacy do you hope this will leave for the country?

It will be lovely to remember the different cities’ involvement and help us treasure things that aren’t just only in London, after all the whole country had to survive the pandemic. Next, we’re launching it in another city, Manchester (followed by Edinburgh and London). Being here in Birmingham has made me reflect on how I taught dress design at the Art College in Birmingham in 1965 and I used to come up on the train from London on a Monday morning and leave on the Monday evening and have chop suey!

Post pandemic, how do you feel our lives have changed positively?

I think that even something like this installation is a positive way of treating the pandemic. It’s happened, now let’s say that it’s great that we’re almost through it, but It might come back again, we don’t know how much all the injections are going to protect us, but I don’t think that has to matter. Gratitude is a positive, wonderful thing and I think also, it can act as a reminder that COVID isn’t over yet, we must continue to be vigilant and be aware of this fact and all the moments and experiences we’ve collectively gone through, like that wonderful old man, Captain Tom Moore, that walked up and down his garden, we’ll never forget him! 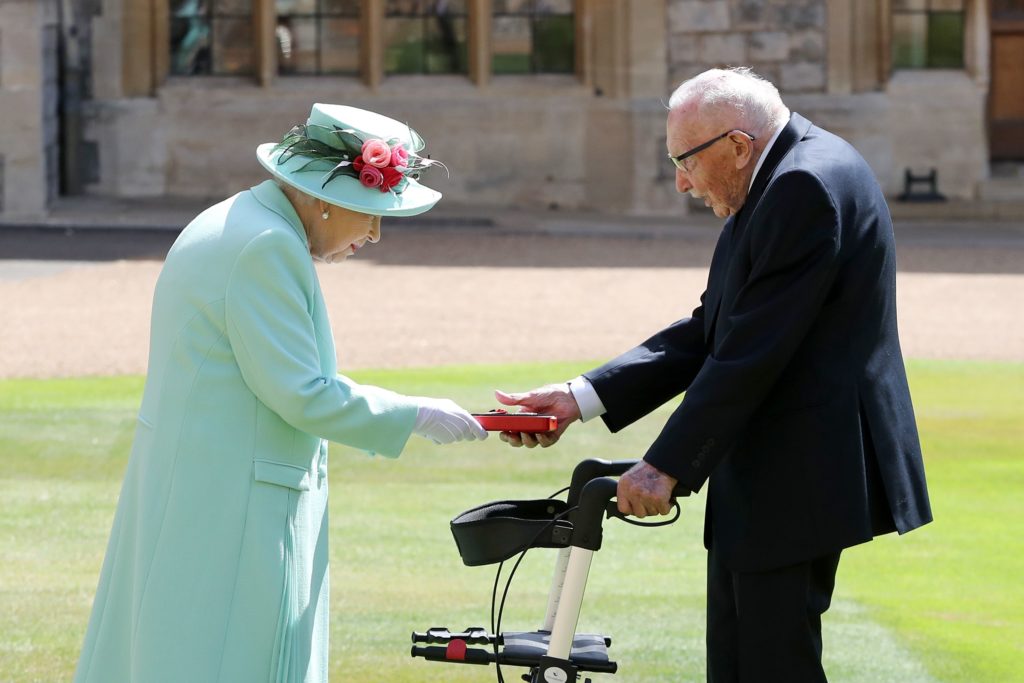 Her Majesty the Queen and Sir Captain Tom Moore

You have been a major pioneer of so many strong fashion movements since the Sixties. How do you think fashion will change in the future?

Fashion will always be something that will change, but it can still evolve without meaning that you’ve got to constantly change your whole wardrobe and destroy half the planet. I believe we’re going to come up with a lot of individual statements where we can buy something new, but treasure and enhance what we’ve got that’s old and consider the planet and make do with less.

We’ve got to think that we need to sustain and preserve the planet for the future, maybe by living our lives slightly differently. I don’t miss any of it (defined fashion 60’s, 70’s 80’s).  I’m really enjoying living in the now, it’s like a second flowering for me. I’m very lucky I’ve had new projects and Zoom during lockdown. I’ve just done a range for IKEA that’s being launched this September and that has been fabulous! My background is as a textile designer, so it’s like I’m coming home.

You have worked with some of the planets most iconic stars, who was your favourite and why?

They’re all different. A funny story, Diana Ross came to London, and she visited my shop, in those days just off Bond Street, she brought a red pleated outfit and she looked gorgeous – meeting her was just wonderful, and she said, “please come to my reception after my show”, and I went, and she was very lovely. Then about six months later, I was in Beverly Hills, and we were driving along, and my girlfriend said, “look there’s Diana Ross” getting out of her car and going into her house, “come on Zandra you’ve met her get out and say hello”. So, I get out of the car and I walk up the pathway about six yards onto the lawn and this cold voice says “if you come any nearer, I will close this garage door down on you”. I got back in the car trembling. The next morning, I come downstairs and my girlfriend and her husband are sitting there with bags under their eyes because they got a call at 3am from Diana Ross; she was recording with Barbra Streisand, and she must’ve said to my friend this girl with green hair with feathers on the end got out of a car and walked up my pathway, my girlfriends told Diana “that was Zandra Rhodes”. I realised that when she first met me, I had a white turban on, so she never saw that I had green hair, she thought I was some mad lady on her driveway and didn’t recognise me!  So, she came round for breakfast that morning and we laughed all about it.

Freddie Mercury, before they were bigtime in 1975 he tried on a bridal top and then walked around, I said “move around like you’re gonna on the stage”. He swooshed around my studio, and I also made pleated tops for Brian, they both came together. 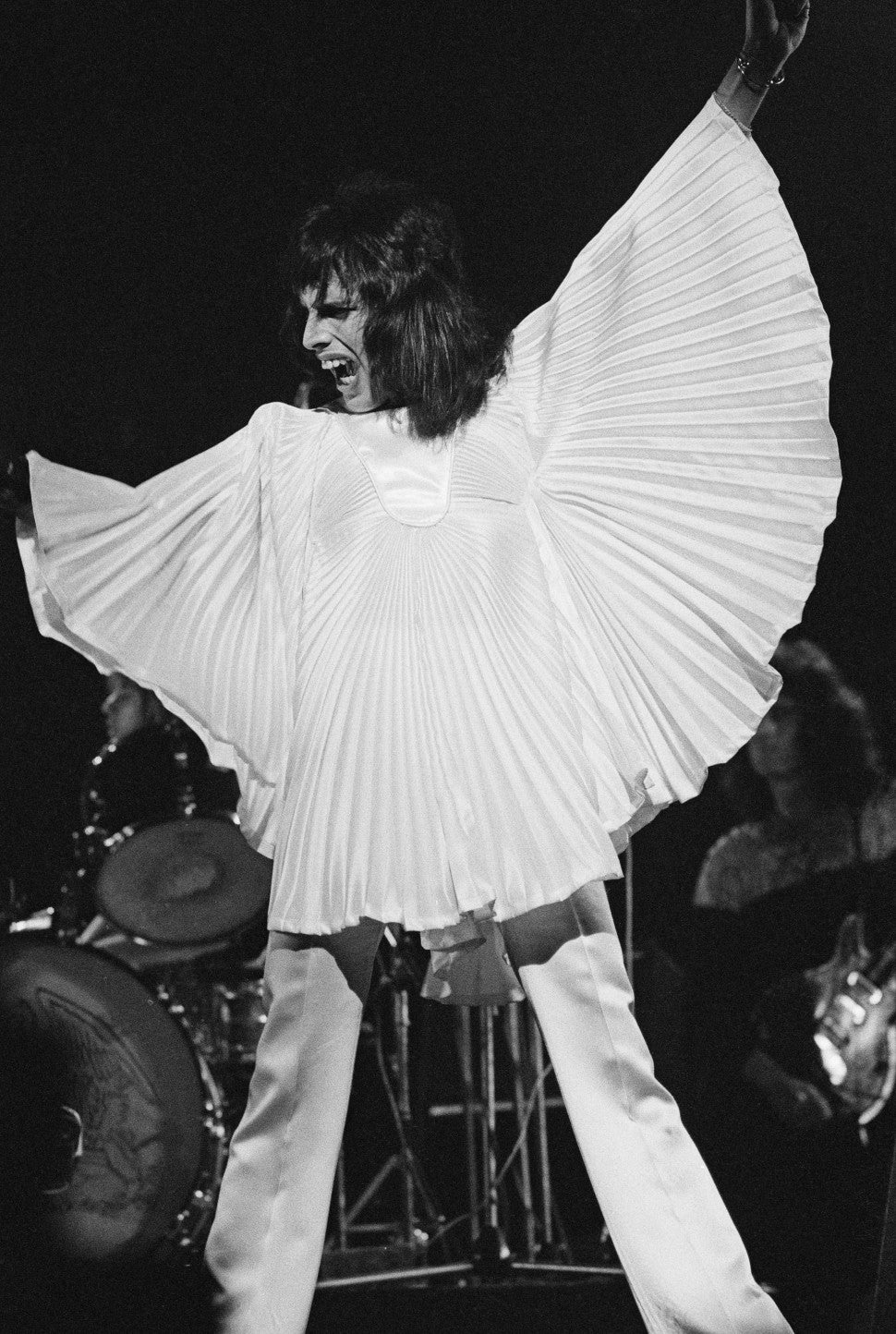 If you could talk to your young self, what advice would you give?

I can’t think of anything I’d say to my younger self because I don’t think I’d have lived any differently, I wouldn’t know how.

You can read more about the city’s Gratitude installation here – Colourful Art Installation Reflects On Pandemic – Style Birmingham (stylebham.com) – and discover how the iconic IKEA blue bag has had a Zandra-style make-over here – It is pink! And yes, it has ruffles! – IKEA Today