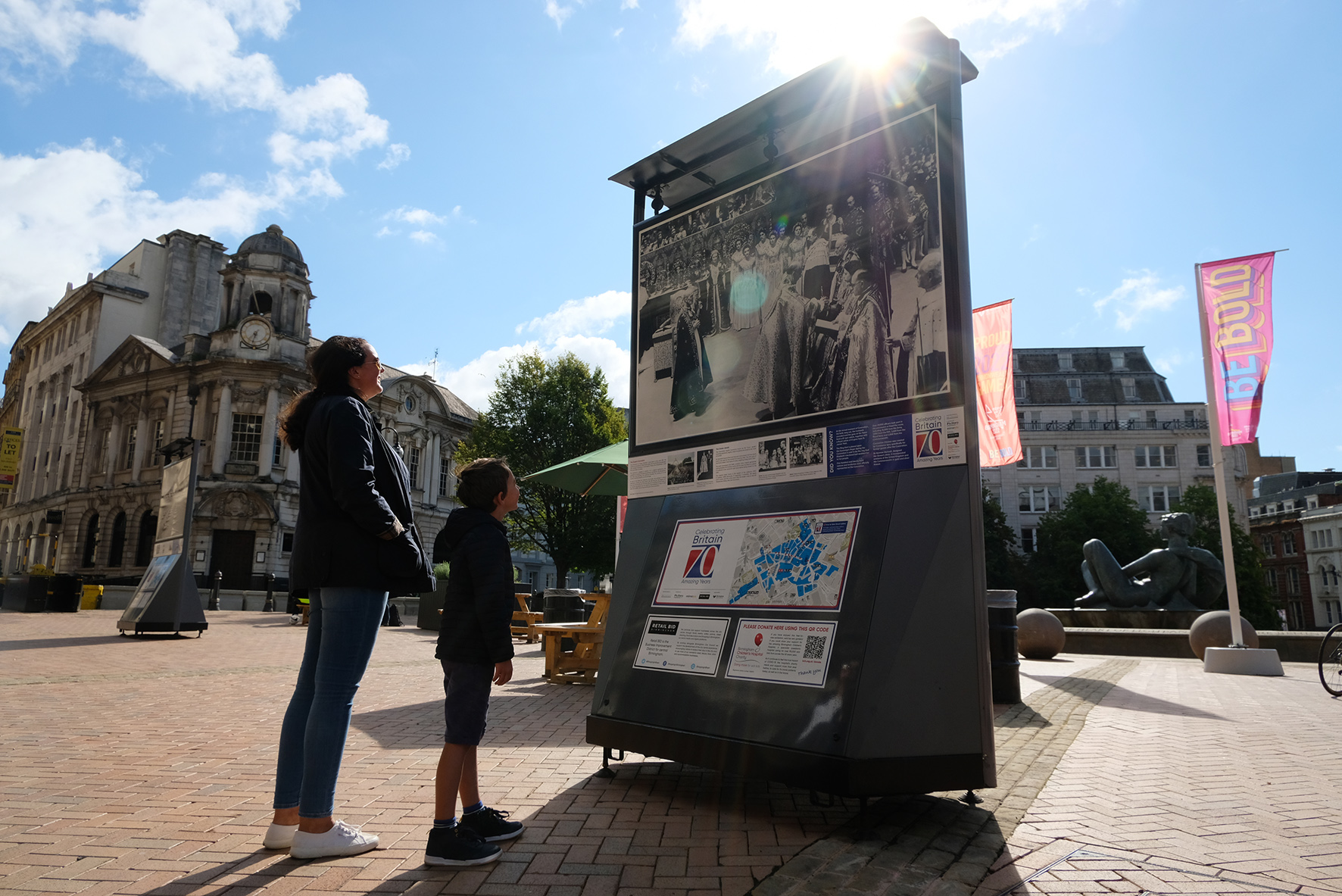 Birmingham is Celebrating Britain this summer with a street photography exhibition showcasing seven decades of achievement through Queen Elizabeth’s reign. 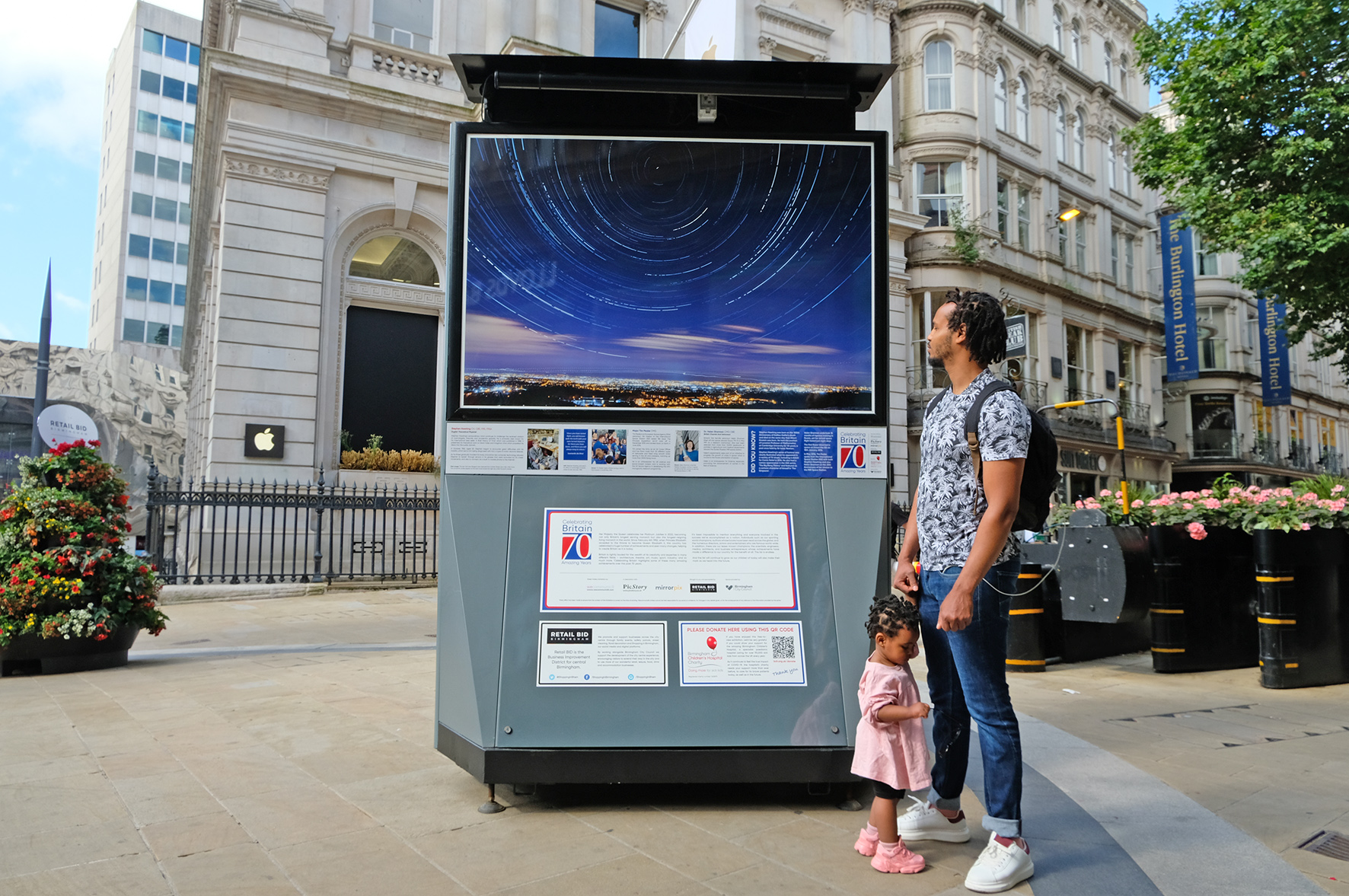 Her Majesty the Queen celebrates her Platinum Jubilee in 2022, becoming not only Britain’s longest-serving monarch but also the longest-reigning living monarch in the world. And since February 6th, 1952, when Princess Elizabeth acceded to the throne to become Queen Elizabeth II, this country has celebrated a huge number of achievements, many of which will be on display during Celebrating Britain. 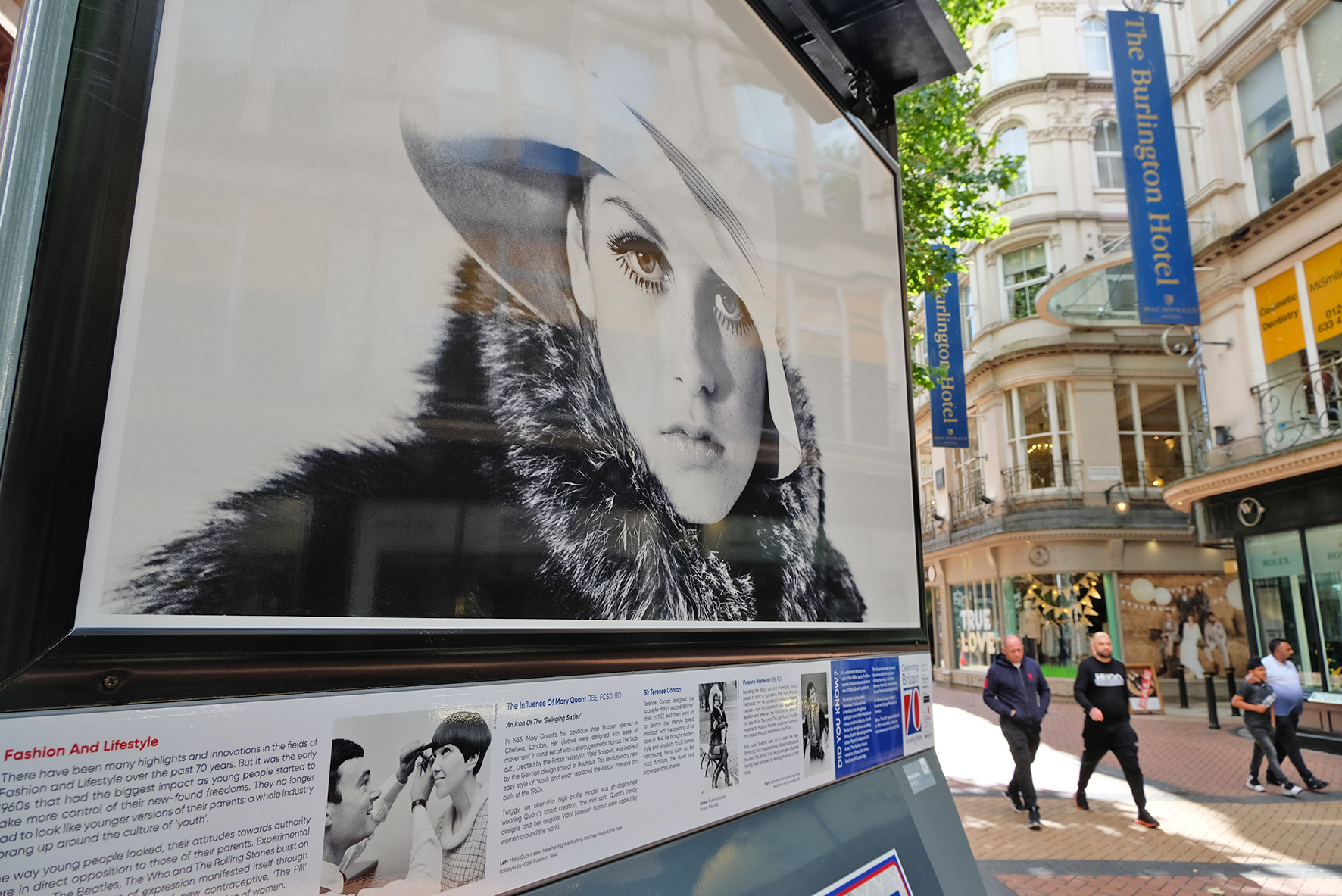 The open-air exhibition featuring more than 180 images central to the country’s history and culture is being hosted by Retail BID Birmingham. It is free to the public and accessible 24 hours a day. The exhibition will be displayed on large-format panels and vacant store windows along New Street, High Street, Union Street, Cherry Street and Victoria Square from July 29.

The diverse collection of images has been curated by street gallery experts Wecommunic8 and sourced from the extensive MirrorPix archives. Each display panel features stories, key dates and background information about each of the photographs with fascinating facts that the whole family can enjoy.

Visitors will see royal occasions, sporting successes, world-famous inventions, landmark moments and a reflection of British cultural diversity from Concorde development to honouring Sir Captain Tom Moore. Shoppers looking for Brummie references will also enjoy pictures of The Beatles in Birmingham, Malala Yousafzai, Princess Diana’s visit to the city to open Victoria Square and Ozzy Osbourne, alongside a list of famous Brummies and Midlanders for visitors to be proud about. 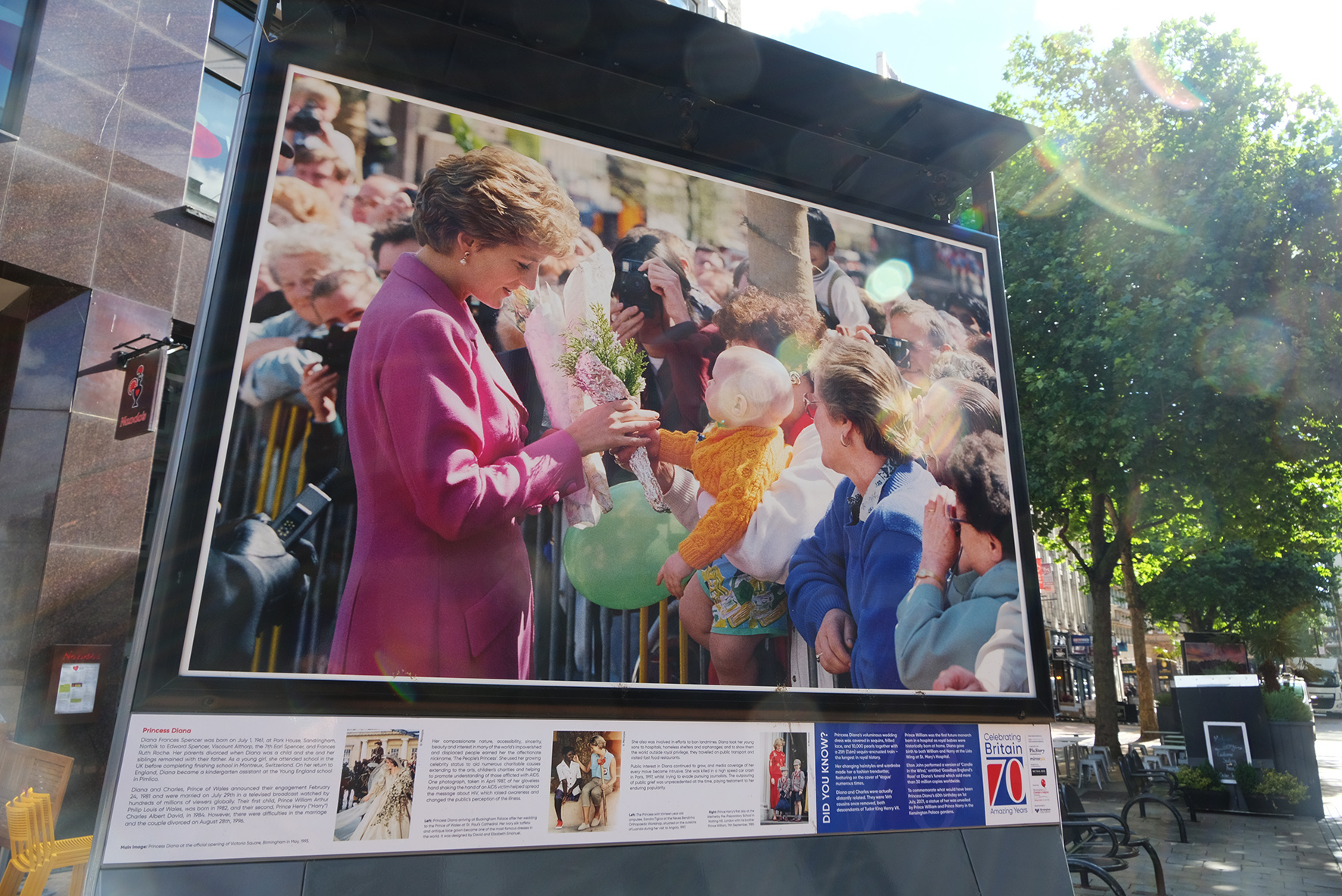 Visitors to the exhibition are encouraged to support Birmingham Children’s Hospital Charity and they can make a donation via a special QR code on each of the caption panels. A trail map shows where the next photographic panel can be found.

Windows on vacant retail units are also being used as part of the exhibition with support from property owners. These images will feature the personalities who have shaped British life over the past 70 years; among them Sir David Attenborough, Sir Elton John, Sir Lenny Henry, The Spice Girls and David Beckham. 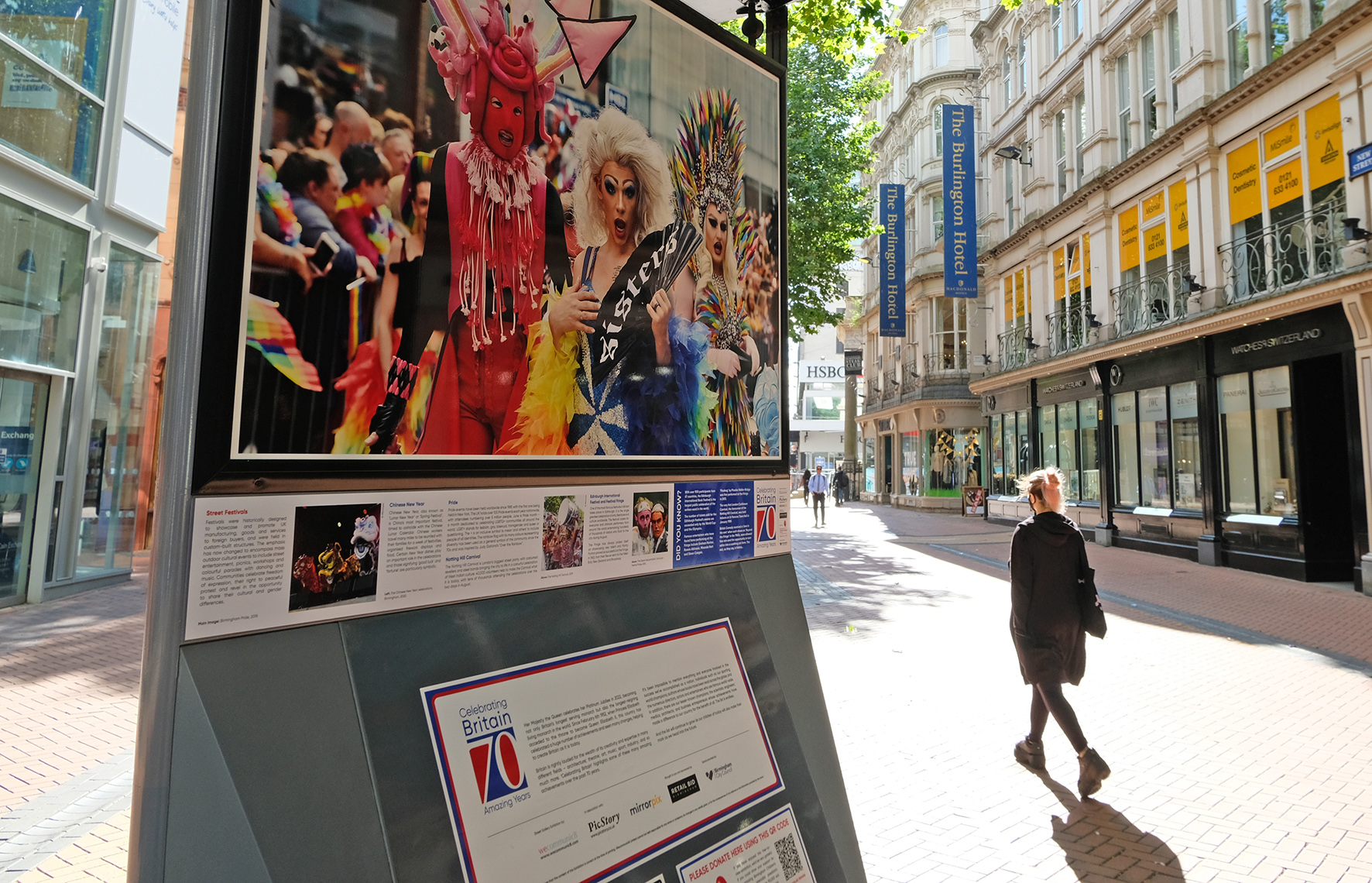 Retail BID Birmingham has funded the exhibition as part of a calendar of events and attractions to bring visitors to central Birmingham. The BID has worked with the city council and property owners to clean and dress the vacant store windows to help brighten city centre streets throughout the summer.

David Pardoe, Deputy Chair of Retail BID Birmingham, said: “Celebrating Britain features some of the most special moments in our history. Our aim is to increase visitor numbers to Birmingham city centre to help businesses recover from the pandemic and we are sure the exhibition will be very popular with families and people of all ages.”